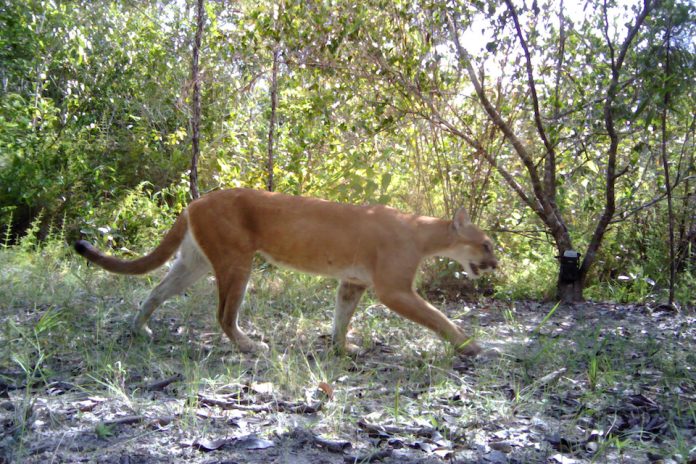 The British Army Training Support Unit Belize (BATSUB) and the Defence Infrastructure Organisation (DIO) have joined forces with conservation charity Panthera to monitor and protect endangered wildlife as part of a three-year programme to ensure essential military training does not disturb local habitats.

Cameras set up to photograph the wild animals in the jungle were destroyed in fires this summer. But new cameras were purchased to continue the valuable work, capturing stunning images of rare animals in the Mountain Pine Ridge Forest Reserves – a 430 square-kilometre area roughly four times the size of Paris.

The Army’s and DIO’s unique, in-depth knowledge of the terrain meant they could set up the cameras in remote and unexplored parts of the jungle, uncovering the previously unseen movements of big cats and other wildlife in their natural habitats.

Their work has confirmed training has little impact on animal roaming patterns and instead found the presence of personnel in the Belize jungle deterred illegal poaching and logging – making it a safer place for exotic wildlife such as monkeys, jaguars and tapirs.

The dedication and teamwork between British Army Training Support Unit Belize, Defence Infrastructure Organisation and Panthera demonstrates the diverse and far-reaching benefits of UK armed forces operating around the world.

This is another example of the resourcefulness of our armed forces and their partners: their efforts have shown the conservation benefits of our Belize jungle training.

Panthera is dedicated to the research and conservation of big cats, with a £14 million research programme in locations across Asia, the Americas and Africa.

I want to thank British Army Training Support Unit Belize and Defence Infrastructure Organisation on behalf of Panthera for providing the extremely useful replacements of the damaged camera units to our project.

We value the relation with British Army Training Support Unit Belize, as an example of how an important international stakeholder collaborates with the Belizean conservation community and government of Belize in a shared responsibility and sustainable use of protected areas.

BATSUB has been present in Belize since 1994, although training paused in 2010 before restarting in 2016. Since then, BATSUB has made significant contributions to protecting the environment through monitoring wildlife, planting trees and collecting data.

READ  Robert Jenrick's speech to the Centre for Social Justice

In 2019, using money from the £400,000 DIO Overseas Stewardship Fund, BATSUB, the DIO and the Belize Defence Force, staff and families planted 200 trees of 18 different species in Price Barracks.

The year before, BATSUB planted local fruit-bearing species, such as mango, craboou, soursop and custard apple in the Manatee Forest Reserve. These trees were planted to support indigenous black howler monkeys and spider monkeys.

We take our environmental responsibilities very seriously and we work hard to ensure that our training is conducted in accordance with the strictest Host Nation environmental policies and in tandem with our colleagues in the DoE, Forestry Department, Panthera, FCD and the many other environmental stakeholders, who work in support of environmental conservation.

We are proud to be able to say that we have planted over 200 trees in Belize in the last 12 months, supported the Forestry Department in the recording of damage caused by the latest wildfires, using our Aviation assets, as well as disrupting illegal hunting, logging, gold-panning and narcotics-trafficking by our sheer presence out in the jungle.

Our relationship with the Belize Government Departments, land owners and NGOs could not be stronger. We have worked together to understand the environmental importance of each jungle training area down to the finest detail, and have collaboratively developed probably the highest environmental standards for range management that the British Army applies across the world.

Operating under a memorandum of understanding and the statement of forces agreement, BATSUB has a licence to train up to 3,750 personnel per year.

The training takes place across a network of government and privately-owned land, alongside the BDF and other foreign forces.

BATSUB jungle training is unpredictable and difficult. The environment gives troops the opportunity to train in a challenging terrain and an austere environment, equipping them with transferrable skills for other environments and operations.