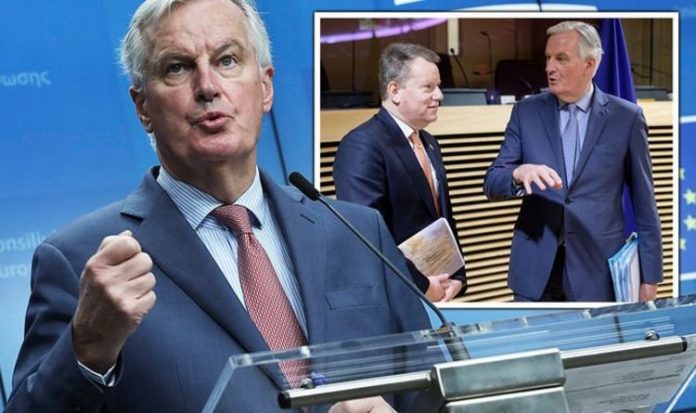 International Trade Secretary Liz Truss signed a free trade agreement with Japan worth £15.2bn, hailing it as the dawn of a new era of free trade. The UK-Japan Comprehensive Economic Partnership Agreement (Cepa) was agreed in principle last month.

But at a signing ceremony in Tokyo, Ms Truss told reporters: “How fitting it is to be in the Land of the Rising Sun to welcome in the dawn of a new era of free trade.”

It is understood once EU officials were made aware of the “new baseline” set by the UK-Japanese deal which included level playing field guarantees – a major hurdle in the UK-EU talks so far – they confronted Britain and talks restarted.

Talks between the UK and EU are continuing through the weekend and EU sources say the new baseline for talks had to be the Japan offer.

One diplomat said the UK deal was “copy-pasted from the EU’s trade deal with Tokyo”.

They added: “The British acceptance of the new baseline unlocked discussions on the issue and pointed the direction of travel for the later talks.”

The main obstacles to a deal remain fishing rights, the so-called “level playing field” rules to ensure fair competition and the governance arrangements for any agreement.

On Wednesday, a day before talks resumed, the EU’s negotiator Michel Barnier said: “They’re willing to do things in a different way to what exists in current trade deals among other countries.”

Talks between Michel Barnier and David Frost resumed on Thursday after Boris Johnson last week called a temporary halt, accusing Brussels of refusing to compromise over the remaining differences.

In an early indication of movement on fisheries from London, Britain last month offered a transition period from 2021 to increase its catch gradually rather than overnight.

But French President Emmanuel Macron said France accepted the need for compromise but vowed to never sell out his fishermen at last week’s EU summit.

He rejected the UK’s demand for annual negotiations on fish quotas in British waters, saying it damages EU industry.

Another EU diplomat said: “Macron holds the key. If France climbs down, we can get a deal.”

“The two can only be solved together, if at all.”

Another diplomat said EU Brexit negotiator, Michel Barnier, this week “wasn’t worried about anything else but fish”.

He added: “Macron has to fight not to have the fishermen on the streets.

“That’s why the French are publicly still in full throttle.”