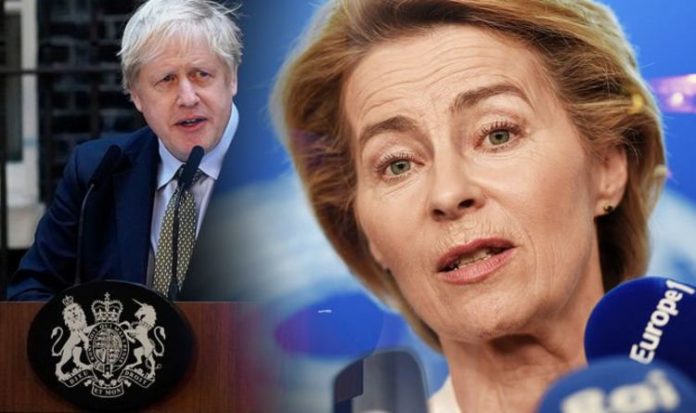 During a meeting of the EU-UK Joint Specialised Committee on citizens’ rights last week, the Commission agreed British people living in the EU can move to a different country to the one they are residing in for purposes including work and study.

However, according to campaigners briefed on the plans, the right to onward movement comes with limitations as people will need to prove five years of continuous residence in the bloc.

Since the UK voted to leave the EU back in 2016, Brits living in Europe have been demanding the continuation of free movement rights.

They claimed the EU’s offer in the Brexit Withdrawal Agreement represents a diminution of their movement rights.

They argued their career prospects within the bloc would be jeopardised if they lost the ability to move freely when the transition period ends in December.

Brits in the EU after Brexit to get extra rights (Image: Getty)

Fiona Godfrey, co-chair of the British in Europe campaign, said: “We received good news on combining our Withdrawal Agreement status with other EU immigration statuses, which should provide some UK citizens in the EU with some further mobility rights.

“We now need clarity on how those rights will be evidenced.”

The Commission also confirmed 25 out of 27 EU countries will differentiate between those who have spent five years or more in the bloc and those who haven’t used the biometric residence cards for British nationals.

The other two countries, who were not named, are reportedly considering an alternative method of demonstrating five-year residency.

Under the Withdrawal Agreement, Brits with a permanent EU residence are able to leave the country and return without losing their status.

During the meeting, the UK and EU heard views from campaign groups British in Europe and The3Million which represents citizens on either side of the Channel.

Although this is a step forward for Brits in the EU, Ms Godfrey says more is needed to ensure citizens on both sides are able to exercise their rights.

She continued: “We are five months away from the end of the transition yet only seven of the 27 countries have opened application procedures.

“A second wave of lockdowns will further delay applications.

“Some [EU countries] are extending the grace period but if we go into this winter without a vaccine [for coronavirus] we may need to see it extended into 2022.

“It is delusional to think that the Withdrawal Agreement can be implemented perfectly in six to 18 months in our circumstances.”

Luke Piper, head of policy at The3Million, argued there needs to be more progress addressing the treatment of EU citizens in the UK after the end of the transition period.

He said: “Whilst solutions were presented by the EU to address some of the concerns raised by British in Europe, there remain some fundamental differences on interpretation of the Withdrawal Agreement around scope and rights.

“We look forward to further contributions and frank conversations.

“We trust the Specialised Committee will work in the spirit of the Withdrawal Agreement and fulfilled the purpose for which it was established to resolve these and future challenges.”

According to Politico, the UK Home Office has suggested an EU Settlement Scheme which “goes beyond the rights of the Withdrawal Agreement”.

A spokesperson for the UK Foreign Office said: “We are closely monitoring member state implementation during the transition period in line with what has been agreed in the Withdrawal Agreement.

“We continue to call on the EU and member states to ensure timely implementation and clear communications for UK nationals in the EU, as the UK has done for EU citizens in the UK.”