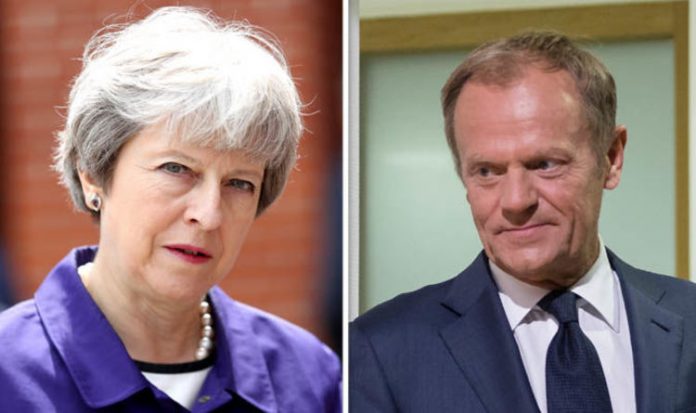 Leading eurocrats in Brussels struggled to hide their pleasure that Brexit secretary David Davis and foreign secretary Boris Johnson had quit the government as Theresa May’s significantly softened her policy on Brexit.

Speaking in a press conference, the European Council President was unwilling to back Theresa May’s much criticised compromise solution from the Chequers meeting with her cabinet.

He told journalists that UK-EU relations are no nearer to being solved than they were before.

Reflecting on the resignation of Mr Davis and Mr Johnson, Mr Tusk said: “Politicians come and go, while the problems they have created for their people remain.

“The mess caused by Brexit is the biggest problem in the history of EU-UK relations and it is still very far from being solved with or without Mr Davis.”

And in a clear nod to hopes that Brexit can be stopped, he Tweeted: “I can only regret that the idea of Brexit has not left with Davis and Johnson. But…who knows?.”

The remark has come amid concerns that EU prevarication over the Brexit negotiations are part of a plan to draw out the process and persuade Britain to change its mind.

Former Brexit minister David Jones, whose job was to talk to EU governments in the first part of the negotiations, said he had no doubt that stopping Brexit was the EU’s ultimate policy.

He said: “Those words from Mr Tusk are very worrying. There is no question that they want to reverse the vote to Leave.

“I remember early on I met with a former Scandinavian Prime Minister who explained to me why Brexit would not happen and that we could just ignore the referendum vote.

“What we have seen is a process of attrition where the British position has been continually softened and in the end the hope [in the EU] is that we will just lose heart and give up.”

Asked about Mr Johnson’s resignation, Mr Juncker dismissively responded: “This clearly proves that at Chequers there was a big unity of views in the British Cabinet.”