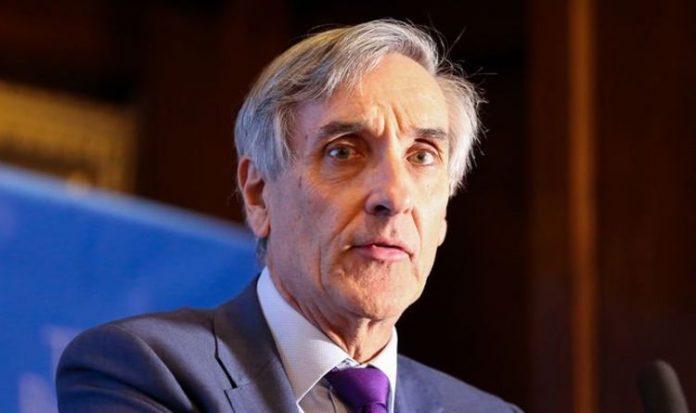 The Chancellor has refused to rule out tax rises as he attempts to tackle the UK’s surging debt. However Sir John Redwood, a leading Brexiteer, argued the Government will increase revenues by cutting taxes as economic growth will be greater.

Writing for the Mail on Sunday he said: “Now is not the time for a budget that raises taxes.

“Or for taking money away from people on benefits.

“Everyone needs to have some money to go out and spend again.

“The Government should also build on its success with the vaccine rollout to keep investing in an optimistic, low-tax Britain.”

Appearing on Sky News’ Sophy Ridge on Sunday, Mr Sunak promised an “honest and fair plan” to start paying down the national debt.

He commented: “I would like to keep taxes low for people.

“But I want to deliver our promises to the British people that we will be responsible with their money.”

The UK’s national debt is now over £2.02trillion, bigger than the entire British economy.

However in his article, Sir John argued tax cuts would increase the total revenue collected by the British state.

He wrote: “When Ireland taxed company profits at the very low rate of 12.5 per cent, it collected much more tax from companies as a proportion of its economy and total revenues than we do.

“This was because large and profitable companies – and billionaires – are able to rebase parts of their business, such as where they book global revenues, in low-tax countries.

“The fact is that putting up tax rates can actually lead to less revenue.”

She urged the Chancellor to focus on “securing the recovery” and added “it certainly shouldn’t be right now in terms of immediate tax rises”.

Under plans unveiled by Boris Johnson on Monday the Government hopes to end all restrictions on social gatherings by June 21.

However it warned this date could slip if the infection rate fails to fall or a new vaccine-dodging coronavirus variant emerges.