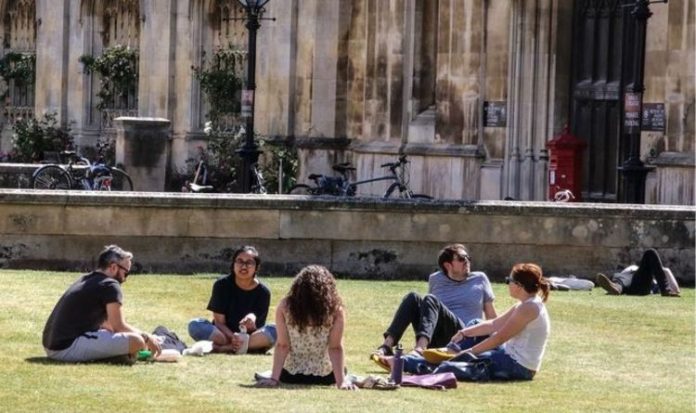 The warning comes in a report from the Civitas think-tank amid growing fears the country’s top educational establishments are being held back by the emergence of a so-called “woke” movement which refuses to tolerate any views it judges discriminatory or disagreeable.

Researchers said the 800-year-old university had been at the centre of dozens of rows over campus censorship, petitions, open letters and speakers being cancelled because of their views.

Critics of no-platforming claim the controversial trend is damaging free-speech but supporters insist it shows solidarity with beleaguered communities and encourages inclusivity.

They also highlighted a survey which found that nearly a third of university staff said they have experienced bullying and harassment in the workplace.

Civitas placed 35 percent of universities in the “most restrictive” category while 51 percent were “moderately restrictive” and just 14 percent made it into the “most friendly” group.

Cambridge was joined by St Andrews, Oxford, Liverpool, Sheffield and a number of other top universities on the so-called “red” list.

The Civitas study found freedom of speech “could be curbed by perceived transphobic episodes” in close to two-thirds of red universities and just under half of green universities.

It warned pressure on free speech due to a “cancel culture” of open letters and or petitions was particularly prevalent, being reported in 69 percent of red universities and 48 percent of amber.

The report found just under a fifth of red and amber universities had been involved in controversies where speakers were uninvited or no-platformed.

The research was completed before Cambridge University was forced to axe rules forcing students, lecturers and visitors to be “respectful of” opposing views after overwhelming opposition from academics.

In a vote described as crucial to the free speech issue, dons successfully challenged a “vague and authoritarian” policy they feared would stifle debate and threaten staff with disciplinary action or sacking for being disrespectful.

Their amendments, which included replacing the phrase “respectful of” with “tolerate”, make it almost impossible to no-platform speakers by cancelling their invitation.

He said: “Already in Britain students have been expelled for expressing their religious beliefs. “Mass petitions have called for the dismissal or defunding of academics because of their research interests and on some occasions, universities have caved into this pressure.

“Too often, activists’ threats are able to shut down events, and there have been appalling incidents directed at the Jewish community at leading London universities.”