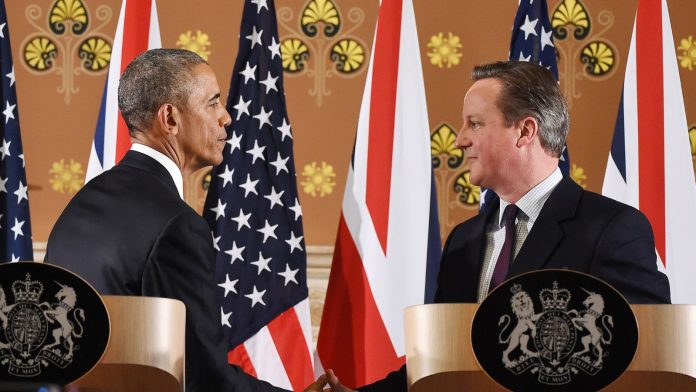 A former key aide to Barack Obama has confirmed David Cameron personally asked the US president to warn Britain would be “back of the queue” for a post-Brexit trade deal.

In April 2016, two months before the Brexit vote, the former president used a visit to London to caution the UK would not be a priority for a trade deal with America if British voters chose to quit the EU.

Mr Obama warned: “The UK is going to be in the back of the queue.”

At the time, the remarks were furiously rejected by Brexit campaigners, who suspected co-ordination between 10 Downing Street and the Obama camp.

They pointed to the president’s choice of the word “queue”, rather than the typically American usage of “line”, as evidence of British involvement in scripting Mr Obama’s comments.

Mr Rhodes, who recently released a memoir of his time working for Mr Obama, has now revealed that was the case.

“We had come here to try to help the Remain campaign and we had a meeting with David Cameron and his team,” he told BBC Radio 4’s Today programme.

“We were all in violent agreement about the negative consequences of Brexit.

“In talking about the press conference they were going to hold together, Cameron and Obama, we were discussing the arguments for the Brexit campaign.

“Some of the arguments were based on the notion the US could just negotiate its own free trade agreement with the UK quickly.

“We all were agreeing that was unlikely to happen.

“As Obama was saying that, somebody on the British side said ‘yes, we’d end up being back of the queue’ and everyone laughed and Obama said ‘that’s exactly right’.

“Then he was asked ‘well, it would be good if you could repeat that point in the press conference’ and, of course, he did.”

Asked if that request came from Mr Cameron himself, Mr Rhodes said: “Yes. And, to be fair to Cameron, I don’t know that Cameron was suggesting the exact phrase that had been used on his side.

“But that’s what had been put forward and Obama said ‘of course, I’m here to be helpful’.”

He added: “Subsequently, it was correct. It was not true that you could skip to the front of the line.

“But, ‘queue’ is not exactly the word that Obama uses in casual conversation.”

READ  Information and events for British citizens in Hungary

He wrote: “There’s some weird whingeing from the Leavers that the fact he said ‘queue’ instead of ‘line’ proves it was written by No. 10.

“I slap it down. ‘Nonsense. The President can speak for himself’.”

Mr Bolton was said to have stressed the president’s enthusiasm for a US-UK trade deal and his belief the two countries can finalise an agreement two years after Brexit.

Last week, it was claimed Mr Trump has tried to persuade France to leave the EU in return for a special trade deal with America.