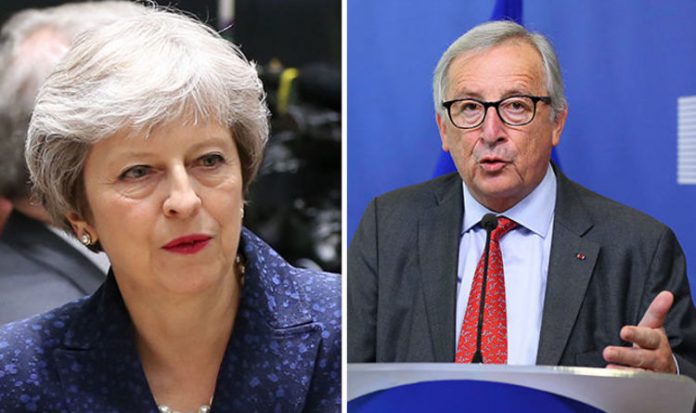 Senior Brussels officials said they would not accept the UK’s demands after reading a draft of the Government’s Brexit white paper.

The document, to be published on Friday, is set to propose the UK stays indefinitely in a single market for goods after Brexit.

In a fresh attack on Mrs May’s negotiation stance, an European Union source accused the UK of wanting to “have its cake and eat it”.

The insider said: “We read the white paper and we read ‘cake’.”

Mrs May will chair a crisis meeting of her Cabinet at her Chequers retreat on Friday to thrash out the Government’s Brexit position.

But another Brussels official said they had low expectations for the outcome of the talks, which could cause a “real problem”.

They said: “If the result of Chequers is not unambiguous, the reality is that a lot of time, the summer, will be lost.

“And then you are really under a heavy time constraint. It increases the chances of a no-deal.”

The comments come as Mrs May prepares to propose a controversial third option for the UK’s post-Brexit customs deal with the EU.

She favours a ‘customs partnership’ with Brussels, which would see Britain collecting EU import tariffs.

But this has proved hugely unpopular with the Cabinet’s Brexiteers including Foreign Secretary Boris Johnson.

Mr Johnson prefers the ‘max fac’ option, which aims to use technology to remove the need for physical customs checks.

And influential backbencher Jacob Rees-Mogg today warned Mrs May could be forced out of office if she fails to deliver Brexit.

The Brexiteer said: “At Chequers, Mrs May must stick to her righteous cause and deliver what she has said she would.

“She must use her undoubted grace to persevere.”

A UK government source refused to comment on the EU’s response to the draft white paper, calling it “unfounded media speculation”.

He only referred back to remarks by Mr Davis calling the white paper “our most significant publication on the EU since the referendum”.