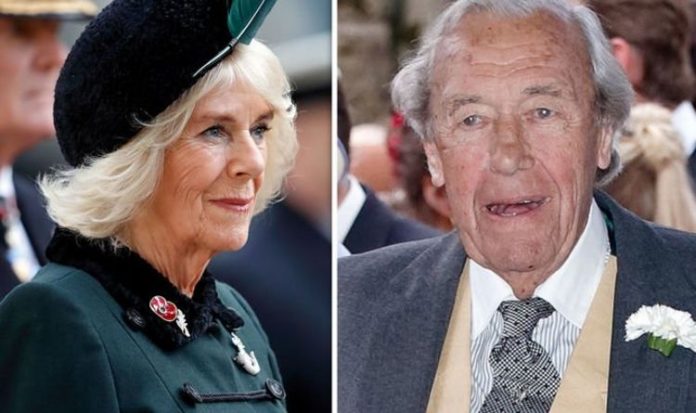 Camilla, Duchess of Cornwall, 73, features in a new royal portrait to mark her new honorary post as Colonel-in-Chief of the Rifles. The Duchess inherited the role from Prince Philip, 99, who held it for nearly seven decades before handing it on in July.

A tweet about the portrait read: “Following the transfer of the role of Colonel-in-Chief of The Rifles from The Duke of Edinburgh to The Duchess of Cornwall, a new official portrait of Her Royal Highness has been released.”

Camilla wears dark green in the portrait – a colour traditionally linked to Riflemen.

READ MORE: Camilla Duchess of Cornwall picture ‘has 3 hints she will be Queen’

According to Mr Fitzwilliam’s, Camilla being made Colonel-in-Chief of the Rifles is a sure sign she has the Royal Family’s approval.

The commentator said: “In July, the Duchess of Cornwall took over the Colonelship of The Rifles from Prince Philip, who served for nearly 70 years in this honorary role with the regiments involved.

“This was seen as an expression of confidence in her undoubted abilities as a senior member of the Royal Family.

“The Rifles was formed in 2007 out of the merger of four famous regiments.”

The expert added: “She wears a brooch commissioned by The Rifles, the silver Bugle Horn is central to the heritage of the regiment and used as the cap badge of The Rifles.”

He added: “This fine portrait is also a reminder of the close relationship which members of the Royal Family have had with the military down the centuries.

“Prince Philip and the Duchess took part in a special ceremony in different locations during the pandemic which symbolised the importance of this handover.

“She has also sent a message to the regiment expressing her thanks for their service to the nation.”