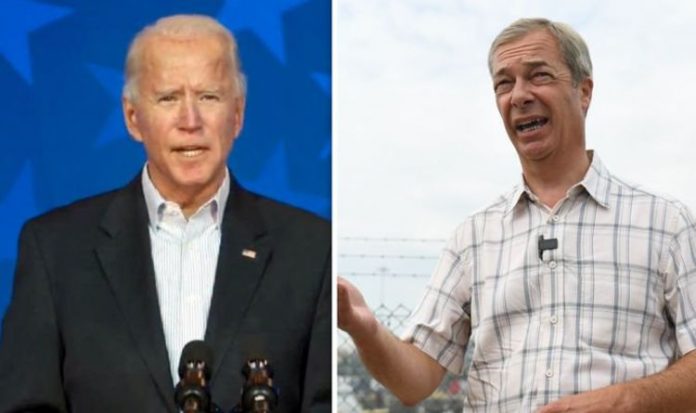 The Reform UK party leader has taken to Twitter to blast the former Vice President’s campaign, while also promoting a conspiracy theory that the Democrats were winning because of fraudulent votes. Mr Farage has been a keen supporter of Donald Trump throughout his presidency, and campaigned with the President in Arizona shortly before the election. Mr Farage also placed a £10,000 bet on Mr Trump winning a second term as President.

Taking to Twiter, Mr Farage responded to an article about an alleged example of voter fraud in Michigan.

The article claimed a man who was dead for more than 35 years submitted a mail-in ballot in Michigan, but provided no evidence for its claims.

Mr Farage responded by saying: “Biden campaigned from his basement in sympathy with many of his voters, who were also six feet underground.“

Mr Farage also posted a video on Twitter where he described the issues with mail-in ballots to promote the allegation they are being used to “steal the election” from Mr Trump.

The Electoral Commission reported 161 cases of electoral fraud in total for the 2019 General Election, with 47,587,254 votes cast and most instances of fraud resulting in a caution with the vote disallowed.

The President hosted Mr Farage at an Arizona rally just days before the election, where he claimed Mr Biden as President would turn the US into a laughing stock.

He added: “You are voting for the only current leader in the free world who has got the guts to stand up and fight for the nation state, to fight for patriotism, to fight against globalism.

“You’ll be voting for the only leader in the western world with the real courage to stand up to the Chinese Communist Party.”

Mr Trump also said at the rally in Goodyear: “If you vote for Biden, it means no kids in school, no graduations, no weddings, no Thanksgiving, no Christmas and no Fourth of July together.

“Other than that, you have a wonderful life.”

On Wednesday, Mr Morgan referred to the President’s alleged comments on injecting bleach to beat coronavirus, which enraged the Reform UK politician.

He said: “He didn’t talk about the word bleach. We are talking about the person who is going to become the leader of the western world.”

After Mr Morgan and Susanna Reid corrected Mr Farage, he lashed out and said: “This is the lowest grade interview I’ve done in 20 years. I’ve got better things to do than this.”