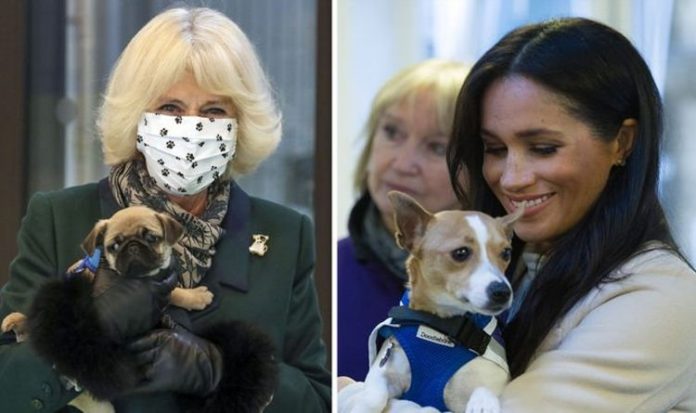 Camilla, Duchess of Cornwall paid a visit to a new animal rescue facility this week, Battersea Dogs and Cats Home Old Windsor. Accompanied by her adorable pooch Beth, a Jack Russell Terrier, Camilla was invited to unveil a new plaque to mark the opening of a new set of kennels named in her honour. But rather than a traditional unveiling, Camilla used the moment to reveal just how much she loves her dog.

During the visit, the Duchess managed to lure Beth into taking part in the unveiling with her, with her tiny canine companion pulling off a cloth to reveal the plaque.

A sausage was tied around a rope attached to the curtain covering the plaque, and as the pooch successfully dragged the curtain away Camilla quipped: “Anyone would think you’ve never been fed.”

Since marrying Prince Charles in 2005 and becoming a senior member of the Royal Family, many of the charitable causes the Duchess has promoted have been linked to animal welfare.

As well as being a patron of the organisation, Camilla also adopted her two dogs Beth and Bluebell from Battersea Dogs and Cats Home.

The Duchess also told the guests at her recent visit: “Thank you very much for asking me to come and open these kennels today. I’m extremely touched that they have been called after me.

“So every time I come here I’ll be able to look at my very own kennels, hence the Duchess of Cornwall Kennels.

“I would also like to thank everybody, everybody here, because I know how tough Covid has been for all of you.

After she relocated to the UK in 2017 following her engagement to Prince Harry, Meghan brought one of her rescue dogs with her.

The Duchess of Sussex was unable to bring the other rescue dog she owned called Bogart, as he was reportedly too old to make the long journey to the UK.

Meghan’s beagle named Guy continues to live with the Duke and Duchess of Sussex in their new California home.

Meghan once described Guy and Bogart as meaning “the absolute world” to her, referring to them as “my loves” and “my boys”.

Before becoming a senior member of the Royal Family, Meghan regularly used to post pictures of her beloved pups on social media, before she deleted her profiles.

The couple have also now adopted another dog, a black Labrador, whose name was revealed to be Pula in the royal biography Finding Freedom.

Like Camilla, Meghan has made animal welfare one of her charitable priorities.

The Duchess is the patron of Mayhew, a charity which aims to keep homeless individuals who rely on their dogs for emotional support united with their pets.

Earlier this year, it was revealed Meghan was continuing to help the UK animal charity Mayhew during the lockdown while residing in the US.