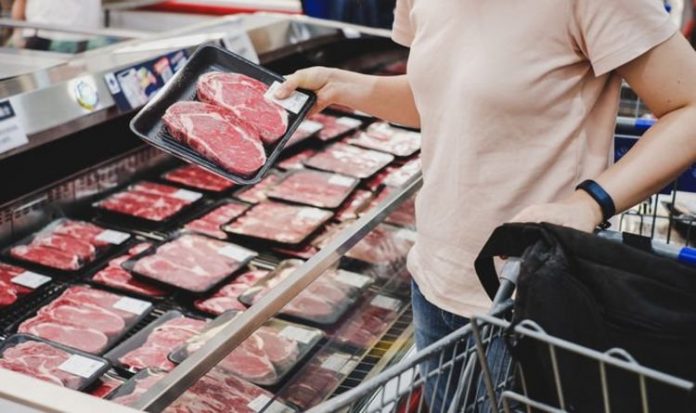 This Morning: Andrew Neil insists he believes in climate change

The Government’s Committee on Climate Change said people should be encouraged to cut the amount of meat and dairy they eat by a fifth in the next decade. Climate advisers said switching to “plant-based options” would reduce greenhouse gas emissions from flatulent farm animals such as cattle, sheep and goats, with consumption falling by 9 per cent by 2025, 20 per cent by 2030 and 35 per cent by 2050. The Sixth Carbon Budget recommended an “average reduction in the consumption of meat by around 89 percent for beef, 66 percent for pork and 63 percent for lamb, and a 20 percent reduction in dairy products” to help reduce the UK’s greenhouse gas emissions over the next 15 years.

The report said: “Consuming more of a plant-based diet can reduce non-communicable diseases like diabetes, heart disease and a range of dietary-related cancers, which in turn can lower the risk of developing severe complications from COVID-19.”

But farming groups hit back, branding the report “disappointing”.

NFU Deputy President Stuart Roberts said: “In Britain we already produce some of the most sustainable meat and dairy products in the world.

“British farming has an ambition to be net zero by 2040 and the NFU’s plan outlines how we can achieve this while maintaining, if not increasing, our production of climate-friendly food.”

“It is important that we all understand the significance of where and how our food has been produced and choosing the most sustainable option.

Britons were urged to eat significantly less meat to save the planet from extreme climate change (Image: GETTY )

The Government’s Committee on Climate Change said people should be encouraged to cut the amount of meat and dairy they eat by a fifth in the next decade (Image: GETTY )

“If you want to continue eating quality, nutritious red meat and dairy while also doing your bit for the planet, it can be as simple as buying British and checking where your red meat has been sourced when eating out.”

She said: ”Dairy simply cannot only be viewed through the lens of greenhouse gas emissions or land use.

“Dairy provides vital nutrition to consumers, such rich nutrition in fact that no one other product naturally matches the range of vitamins and minerals found in dairy.

“Encouraging a reduction in dairy could leave many consumers struggling to replace the valuable package of nutrients they get from dairy and paying higher food bills in the process.”

The report recommendations came as part of the UK’s plans to cut greenhouse gas emissions by nearly four-fifths by 2035.

They urged for the sales of gas boilers to be halted by 2033 and said new fossil-fuelled car sales – including hybrids – should end in 2032.

The Committee on Climate Change said the moves were needed to meet its recommended target for the UK to cut emissions by 78 percent by 2035 on 1990 levels, as part of the sixth “carbon budget” covering climate action in 2033-37.

The five-yearly budgets aim to help the UK meet the long term legally-binding goal to bring climate pollution down to zero overall or “net zero” by mid century, as part of efforts to prevent dangerous climate change.

It represents a major increase in ambition in UK climate efforts, with the new 2035 target almost as tough as the previous long term goal of 80 percent cuts by 2050, which was in place before the net zero law was passed in June 2019.

But the committee’s chairman Lord Deben said it was “realistic and affordable” as well as ambitious, and provided a chance to jump-start the UK’s economic recovery after the coronavirus pandemic.

He said investments to cut carbon were what was needed to get out of the recessional effects of the COVID-19 crisis.

Investment of £50 billion a year by 2030 will be required, most of which will come from the private sector.

But over time, savings in fuel costs, including less gas for power and heating and petrol for cars, will offset most of the needed investment.The report also said the Treasury is likely to have to double funding for green measures to £9-12 billion a year in 2030.

Lord Debden said: “We have to do it to protect the planet, but we are having to do it in order to renew our own economy, and we can do it at a price that is manifestly reasonable.”It will be the private sector that will do much of the investment, but it will be the Government that will set the tone.”

Committee chief executive Chris Stark said the goal to hit net zero in the UK by 2050 was “feasible, we think it can be done”, but added: “It’s a massive task overall to pull off, which rests especially on action in the next 10 years”.

The report warned there can be no increase in UK airport capacity, so any expansion such as at Heathrow must be balanced by reductions in capacity elsewhere in the UK.