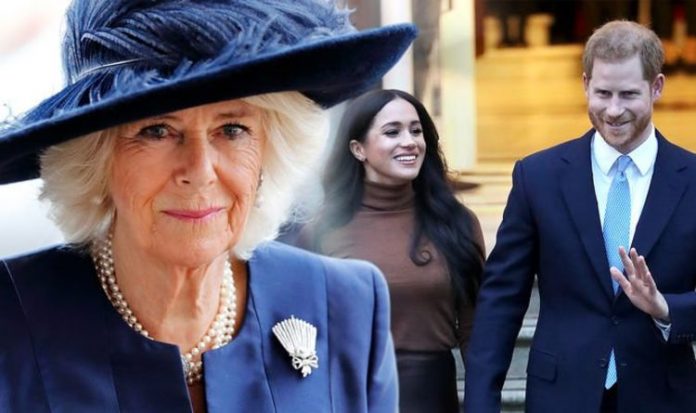 Meghan Markle, 39, and Prince Harry’s whirlwind romance and the days surrounding the official announcement of their engagement are chronicled in new book Finding Freedom. In the unofficial biography, authors Omid Scobie and Carolyn Durand touch on the tributes the couple received from other members of the Royal Family.

Prince Harry and Meghan stepped out to deliver their happy news to the press in the sunken gardens at Kensington Palace on November 27, 2017.

Prince Harry’s father Prince Charles, 71, and his wife Camilla, Duchess of Cornwall, 73, were among the first family members to share their joy for Meghan and Harry with the public.

However, Camilla’s kind words now seem bittersweet, given Meghan and Harry’s move across the pond.

The authors write: “Sixteen months after meeting her prince, and just over three months after their secret engagement, Meghan was announced as the next royal bride.

“The Queen and Prince Philip were quick to follow the news of the engagement from Clarence House with their own message that they were ‘delighted for the couple’ wishing them ‘every happiness.’

“Charles, who like the other family members had known since the summer, added that he was ‘thrilled’, and Camilla, the Duchess of Cornwall, jovially declared, ‘America’s loss is our gain.'”

At the time of their engagement stepping away from their royal roles is unlikely to have been on Harry and Meghan’s minds.

However, less than two years after their spectacular royal wedding their declared their wish to withdraw as working royals.

Meghan and Harry have since bought and moved into a mansion in Santa Barbara’s upscale Montecito neighbourhood and look likely to remain there for the foreseeable future.

Meghan has begun to engage in American politics again recently speaking out to encourage women to vote in the upcoming US election.

Last Thursday, Meghan took part in a virtual couch party to mark the 100th anniversary of the 19th Amendment which gave American women the right to vote.

Speaking during the conversation Meghan said: “As we look at things today, though it had taken decades longer for women to get the right to vote, even today we are watching so many women in different communities who are marginalised.”

Meghan added: “Still struggling to see that right come to fruition. And that is simply not OK.

“It’s all the more reason for each of you to be out there supporting each other to understand this fight is worth fighting, and we all have to be out there mobilising to have our voices heard.

Prince Harry remains a British citizen and will be unable to cast a vote in the US election.

While the couple have held on to their Windsor home Frogmore Cottage it is not known when they might next return to the UK.

They were expected to visit the Queen at Balmoral with Archie this summer but given the coronavirus pandemic, the trip is likely to have been ruled out.