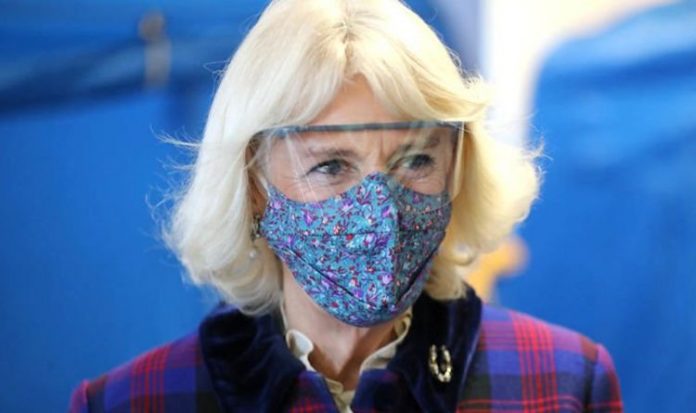 They visited a vaccination hub at the Queen Elizabeth Hospital in Birmingham on their first in-person official royal engagement this year. The royal couple wanted to meet vulnerable patients and staff getting the vaccine and thank some of the 250,000 unsung heroes who have taken part in clinical vaccination trials. Urging others to get the jab, as they have done, Charles, 72, and Camilla, 73, soothed 50-year-old Nicki Cadwallader, a patient who had her vaccine yesterday as part of a trial for cancer patients.

Charles told her: “Don’t worry it doesn’t take too long.” Camilla added: “It’s a good thing. It doesn’t hurt. I was waiting for it to be done and they said ‘It has been done’. It was painless. It was brilliant.

“‘It’s very good when it’s over as you feel more secure. Panic over.”

She later told more trial staff: “I leapt for joy. I didn’t feel anything. I’m eternally grateful for everything.”

Nicki, a property developer and mother of three from Bromsgrove, Worcs, has been shielding since November when she was diagnosed with breast cancer. She is part of a trial to test the vaccine on chemotherapy patients.

She said: “I’m delighted. I’ve been waiting for this day for a long time and I’m so happy. I can get my life back.

“I’m glad they have shown an interest because they have had the vaccine too.

Camilla greeted others having their jab after her own (Image: Getty)

“If it encourages more people then I’m all for it. People shouldn’t be hesitant. I can get back to normal again. I’m happy the country got it so quickly. This means the world to me.

“I can’t wait to go back down the supermarket again. It’s the simple things.”

Charles, who contracted coronavirus in March last year, was joined at the hospital by Health Secretary Matt Hancock.

In a speech to staff, the Prince said: “The Secretary of State mentioned just now that the National Health Service was 72 years old, which happens to coincide exactly with the same age I am.

“And the great thing is that the NHS has done a great deal better, I can assure you, than I have, as I am gradually falling apart.

“It’s been such a great joy to have the chance of seeing some of you today and finding out a little bit about all the extraordinary efforts you have been making, I know, over the last year.

“It must be absolutely exhausting for so many of you, but I know the NHS is such an enormous team and there are masses of people who are unsung and unseen heroes and heroines.

“We owe them all such an enormous debt of gratitude and for so many of you particularly, the pressures are huge.

“It must be so difficult with trying to organise all the other aspects of your lives, let alone the difficulties when you are dealing with people who are very, very sick or those who have tragically died.

“You are an amazing team, if I may say so. We are very lucky indeed to have you and I hope you continue to have increasing success in battling against this abominable virus.

“But you are winning by the sound of it and that is the great thing. So thank you, thank you for everything you do for all of us.”

Volunteers have taken part in gruelling vaccine studies at hospital and research sites for up to 12 months. More than 250,000 have signed up, including Vaccines Minister Nadhim Zahawi.

Without them the jabs could never have been approved.

The University Hospitals Birmingham NHS Foundation Trust recruited 12,000 patients for trials, the largest number in the country, including almost 800 for the vaccine developed by the University of Oxford and AstraZeneca.

Mako Kandola, 65, who is taking part in one of the trials, said: “I just wanted to do my bit.”

The vaccine developed by the University of Oxford and AstraZeneca (Image: Getty)

Harriet Nash, 69, said: “I told the Duchess I saw it on the NHS app and I wanted to do whatever I could to help.”

Mr Hancock said: “Thankfully, there are signs we are on our way out.

“There is still a long way to go. Things are improving.

“At this hospital the number of patients with Covid has fallen from more than 1,000 at its highest, the biggest of any hospital group in the county, to under 600.

“And the vaccination effort at this hospital hub has been one of the best in the entire country.”