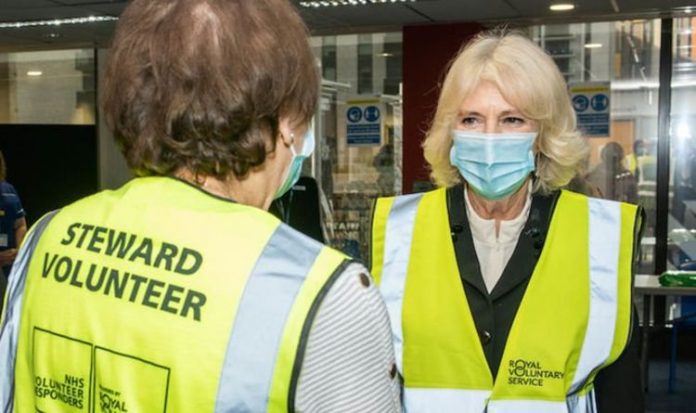 Camilla joined volunteers and medical staff at London’s largest inoculation centre, based in Wembley. During her visit, the Duchess of Cornwall opened up on her how she felt after receiving her first jab against coronavirus – and her hopes for the future.

Speaking to people waiting to receive their vaccination, Camilla said: “It feels like the first step of freedom, I certainly felt like that.”

She added: “I hope you’re able to be reunited with your grandchildren, I think we’re all looking forward to that!”

Camilla visited the centre in Wembley as the president of the Royal Voluntary Service (RVS).

Meeting some of the thousands of people who signed up to become NHS Volunteer Responder stewards face-to-face, the Duchess had the chance to thank everyone who gave up their spare time to support the NHS in the vaccine rollout.

Camilla news: Camilla is the president of the RVS (Image: GETTY)

This engagement came as NHS Volunteer Responders scheme, delivered by the RVS and the GoodSAM app, revealed its volunteers have answered more than 1.5 million requests since the beginning of the pandemic.

People shielding, self-isolating or unable to leave their home can request help shopping for essential and collecting prescriptions.

Many volunteers also “check in and chat” with people who are self-isolating, the vulnerable or elderly who live alone.

Camilla herself joined this initiative during the first national lockdown.

After leaving quarantine following Prince Charles’s positive test for coronavirus, the Duchess got in touch with Doris Winfield, an 86-year-old mother-of-three who lives alone and has been shielding during the pandemic.

Ms Winfield and Camilla eventually met face-to-face in October, when the Duchess turned dinner lady at the Mill End Lunch Club in Rickmansworth, a place for older people to relax, socialise and enjoy a meal.

Camilla news: Camilla has been vaccinated against COVID-19 (Image: GETTY)

During her visit, the Duchess revealed she had remained in touch with Ms Winfield since first speaking to her in April.

Chatting with the elderly mother, Camilla said: “You said to me to pop in if I was ever passing, so I have!”

After their meeting, Ms Winfield said: “Getting to meet the Duchess of Cornwall in person after our phone call earlier in the year was such a surreal experience and one of the best moments of my life.

“It felt like meeting an old friend! It’s easy to feel anxious at the moment, with the prospect of a long winter and possible isolation ahead, so meeting the Duchess was a welcome distraction.”

Camilla’s visit in Wembley marked the second face-to-face engagement she carried out after a two-month stop due to the lockdown.

The Duchess and Prince Charles stepped out of their residence to visit Queen Elizabeth Hospital in Birmingham, where volunteers are undertaking clinical trials for COVID-19 vaccinations.

Their visit took place only a few days after Clarence House confirmed both Charles and Camilla had been vaccinated against coronavirus, joining 18 more million people across the country.

Prince William has also stepped out of his home in Sandringham to carry out a face-to-face engagement.

While visiting a vaccination centre at the King’s Lynn Corn Exchange in Norfolk, Prince William also provided an update on his grandfather’s health.

Asked by veteran royal photographer Arthur Edwards how the Duke of Edinburgh, who was admitted to hospital last Tuesday, is doing, Prince William said: “Yes, he is okay – they’re keeping an eye on him.”

The palace issued an update on the Duke’s health condition yesterday saying: “The Duke of Edinburgh remains at King Edward VII Hospital, where he is receiving medical attention for an infection.