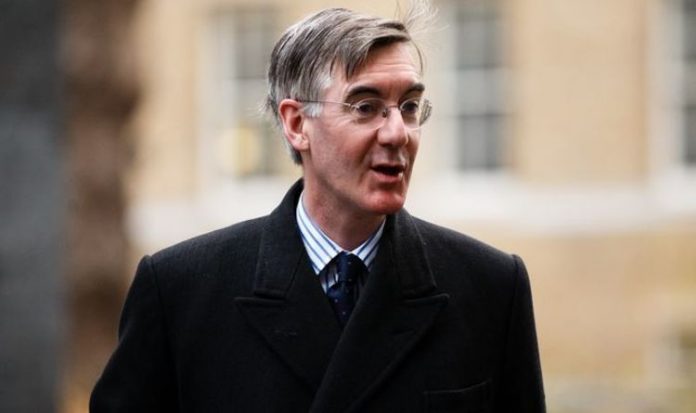 Earlier this week, Prime Minister Boris Johnson unveiled his roadmap for the easing of coronavirus lockdown rules in England. The announcement shared with MPs in the House of Commons on Monday afternoon laid out the gradual reopening of the economy over a period of at least four months.

According to Mr Johnson, each stage of the roadmap relies on four data-focused tests being met, including the success of the vaccine rollout.

Now, despite Mr Johnson and Health Secretary Matt Hancock insisting the roadmap dates are the earliest when they could be relaxed, Mr Rees-Mogg has suggested otherwise.

When asked whether the timeline could be brought forward, Mr Rees-Mogg said: “Inevitably governments always have within them a degree of flexibility.

“But I think the logic behind the timeline is impeccable.”

Mr Johnson is facing a Tory rebellion as MPs have called for him to move faster and urged restrictions to be eased when all the vulnerable were vaccinated.

But Mr Johnson slapped down those urging him to move faster.

The Health Secretary added: “No. We need to see the effects of each step, and that takes five weeks.”

Professor Jonathan Van-Tam also backed the timeline and said it was a “careful and painstakingly cautious” approach.

He said: “If, for example, you react too quickly and say ‘oh, it’s all going marvellously, look, infection rates are coming down’ and you don’t wait for that lag to see what the impact is on hospitalisations and deaths, then you’re always at risk of getting it wrong and going too fast.

“And we factored all of that in these carefully measured steps.”

He then added: “I completely get it, I am desperate for the football to be back, but actually I would rather do this once and get it right and not have to make any U-turns or backtracking, I would rather just go slowly and steadily and get there in one go.”

During his Monday announcement, Mr Johnson told the House of Commons the roadmap would be based around “data not dates”.

He went on to detail the tests that must be met for each of the stages to be accomplished at the outlined earliest date.

He said: “At every stage, our decisions will be led by data not dates, and subjected to four tests.

“First, that the vaccine deployment programme continues successfully; second, that evidence shows vaccines are sufficiently effective in reducing hospitalisations and deaths; third, that infection rates do not risk a surge in hospitalisations which would put unsustainable pressure on the NHS; and fourth, that our assessment of the risks is not fundamentally changed by new variants of Covid that cause concern.

“Before taking each step we will review the data against these tests and because it takes at least four weeks for the data to reflect the impact of relaxations in restrictions and we want to give the country a week’s notice before each change – there will be at least five weeks between each step.

“The Chief Medical Officer is clear that moving any faster would mean acting before we know the impact of each step, which would increase the risk of us having to reverse course and re-impose restrictions. I won’t take that risk.”

England was plunged into its third national lockdown back in January as cases of the coronavirus pandemic soared up after restrictions were eased over Christmas.

More than 17,000,000 people have received their first dose of the coronavirus vaccine.

According to Government figures, 642,788 people have received their second jab of the vaccine.