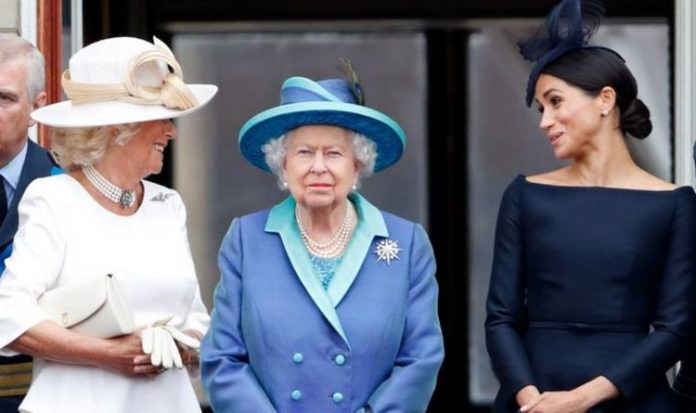 The Duchess of Sussex dramatically quit her role as a senior member of the Royal Family to start a new life with Prince Harry and son Archie in the US earlier this year. The move came after the couple had spoken about about some of their struggles within the royal fold while they were in South Africa just months before. It has since emerged that Harry’s mother-in-law Camilla is now facing public backlash over the way she has been portrayed in Netflix’s new historical drama The Crown. But is has been claimed the two women have received different support from the royal palaces.

Royal commentator Daniela Elser claimed Camilla’s image is being protected from “online hate” through a palace strategy, although she did not give a specific outline on the plan.

She told news.com.au: “It would seem that the courtiers of Buckingham Palace and Clarence House, the official residence of Charmilla, have been quietly beavering away on a counter-strategy.”

Ms Elser added: “The palace has proven they are perfectly adept at carefully calibrated PR manoeuvres, all undertaken to protect the image of Camilla from swelling public dislike and online hate.”

But Ms Elser added she believes that Meghan did not receive the same kind of support.

She said: “No matter who was to blame for which particular publicity catastrophe, surely it would have been in the best interests of the palace machine to try and step in and attempt some sort of calculated fight back.

“While they did push back against a number of erroneous stories, such as a report that Meghan had pressured Harry to not take part in a pheasant shoot; that she and Kate were locked in a feud and one magazine’s claim that they planned to raise their then-unborn child ‘with a fluid approach to gender’, there was never any evidence pointing to some royal master plan to try and protect Meghan from the bombardment of carping and criticism she constantly faced.

“Where exactly was the overarching strategy? Where was the bigger picture plan to shield the palace’s most dazzling new recruit in a generation from the opprobrium being flung her way?”

Netflix released the fourth series of The Crown last week, just days before The Royal Family posted a picture of Camilla on Instagram as she attended a virtual prize-giving for the written entries of the 2020 Queen’s Commonwealth Essay competition, which had the theme “Climate Action and Commonwealth”.

The official Clarence House social media accounts were reported to have turned comments off amid the backlash.

Meghan also sparked concern during her royal tour to South Africa in October 2019, when she opened up about her struggles as a royal and said not many people had asked if she was OK.

She told ITV’s Tom Bradbury at the time: “Not many people have asked if I’m OK, but it’s a very real thing to be going through behind the scenes.