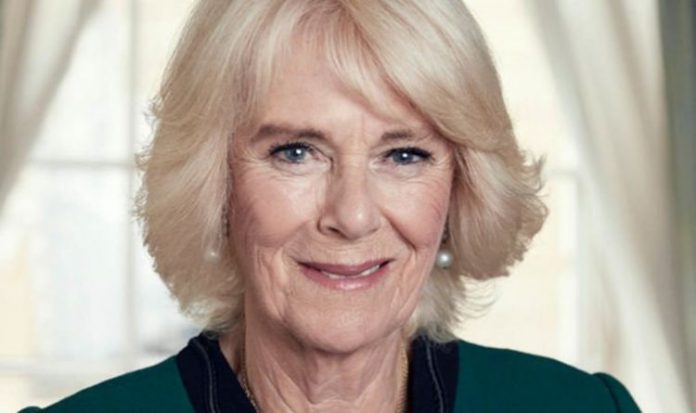 Camilla, Duchess of Cornwall, became Colonel-in-Chief of The Rifles over the summer, when Prince Philip passed on to her this rank. To mark this poignant passage of duty, Clarence House released today a new portrait.

In the portrait, Camilla honours the infantry group by wearing a badge with The Rifles’s symbol on her lapel.

The stunning new picture has been released alongside a video message to the Riflemen.

Speaking as the infantry group’s new Colonel-in-Chief, the Duchess pays tribute to her “dear father-in-law”, who led the four regiments who eventually formed The Rifles in 2007 from 1953 to last July.

She said: “Riflemen, following my appointment as your Colonel-in-Chief, I wanted to take the opportunity, via the best mean possible in this current and challenging climate, to express how honoured I am to take up this prestigious role.

“I must begin by paying tribute to my predecessor, my dear father-in-law His Royal Highness The Duke of Edinburgh, who having been Colonel-in-Chief of the successive regiments who have made up The Rifles since 1953 has set the bar incredibly high.”

During the video message, Camilla also spoke about her personal attachment to The Rifles.

Speaking about her father Bruce Shand, who was captured by the Germans as World War II was ending, Camilla said: “He managed to escape, spending two days and nights hiding in the woods with Edward Rose, a lieutenant from the Green Jackets, whom I was lucky enough to meet three years ago in Canada.

“My father would only refer to his wartime service on rare and precious occasions.

“But I well remember the warmth and admiration for The Rifle regiments.”

Camilla became Colonel-in-Chief of The Rifles on July 22, following a ceremony taking place between Windsor Castle and Highgrove House.

On the day, Prince Philip stepped out of his Berkshire home to inspect the guard made by a few Riflemen.

Before relinquishing his role, he was thanked for his 67-year-long service as Colonel-in-Chief by Assistant Colonel Commandant, Major General Tom Copinger-Symes.

“And happy Salamanca Day All Rifleman, whether serving or retired would like to thank you for 67 years of continuous service, support and leadership to the Rifles and to our forming and antecedent regiments.

“And on this occasion, as you hand over your duties as Colonel-in-Chief to her Royal Highness, the Duchess of Cornwall, we would like to wish you fair wind and following seas

“And with that, Sir, may I have your leave for the Bugle Major to sound the Rifle Call and No More Parades.”

A few minutes after the ceremony was completed in Windsor, Camilla stepped out of Highgrove House, 85 miles from Berkshire, to be officially appointed Colonel-in-Chief by General Sir Patrick Sanders.

Camilla had been linked to The Rifles for years before this poignant appointment.

In 2007, upon their creation, she became Royal Colonel of 4th Battalion of The Rifles, a title she continues to hold.

The Duchess carried out her first full engagement as Colonel-in-Chief of The Rifles in September, when she visited Beachley Barracks in Chepstow.