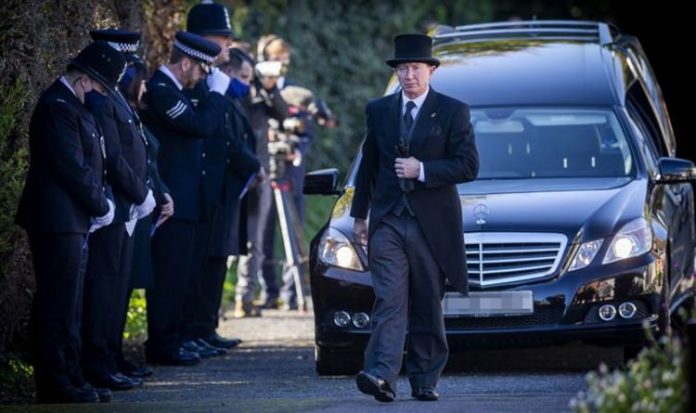 The memorial in Shoreham-by-Sea, West Sussex, was attended by only a few mourners due to corona-virus ­restrictions. But the event was live-streamed around the world
so well-wishers, including in his native New Zealand, could join the service.

Sgt Ratana, from Goring, West Sussex, was a few months away from retirement when he was killed.

A friend read a tribute from his partner, Su Bushby, inset. Su wrote: “Matt made the most of every minute of his ­precious 54 years. In any situation or room he walked into, his
presence would always be felt. Like a big ball of energy. You will always be in my heart and in my soul.”

Met Police chief Dame Cressida Dick said he had received ­several commendations, including when, while off duty, he followed a suspect who was armed with a gun and knife.

She said: “The key to what made Matt a great police officer has already been mentioned – his lovely nature, and his big generous lion’s heart. He brought amazing energy and determination to the job, as to his life – as enthusiastic after 25 years as he was after two.”

A tribute to rugby coach Matt was read out on behalf of relatives in New Zealand – including his brother James, sister Jessica and stepmother Dianne – by Met Police colleague Detective Constable Neil Perkin.

They said: “Matt’s death has been a harrowing experience for his family and friends here in New Zealand and around the world.

“It’s magnified by the distance and by the epidemic, which has ­prevented any of us being able to travel to his service.

“We are comforted by the knowledge that he is with people who love him as much as we do.”

In a tribute read by DC Perkin, Sgt Ratana’s son Luke, also a policeman, said: “It makes me very proud how he touched the lives of so many.”

Following the service former All Blacks captain Zinzan Brooke led a haka outside the chapel. The funeral was followed by a private cremation.