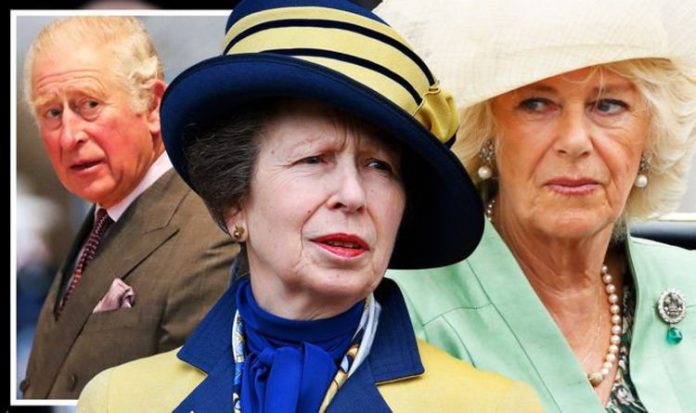 This Christmas has been like no other for the Royal Family. The Firm usually gathers at Sandringham Estate to mark the festive period with the Queen and Prince Philip. The coronavirus pandemic, however, left the family’s plans in tatters, with most members spending the day in their own couples. And while protocol was thrown out the window, it might have come as a moment of relief for those who have long been reported to have bitter feuds.

One notorious alleged rivalry is between Camilla, Duchess of Cornwall, and her husband’s, Prince Charles, sister, Princess Anne.

Royal author Penny Junor has previously said this feud is rooted in the fact that both women previously loved the same man – Andrew Parker Bowles.

Anne, the Princess Royal, had a brief relationship with Andrew before he and Camilla married in 1973.

The affair between Anne and Andrew did not last.

She said: “It was while he (Andrew) was having a relationship with Princess Anne, that Camilla was introduced to Prince Charles and had a little fling with him.

“I guess there was an element of tit-for-tat in Camilla’s relationship with Charles.

“There was the man she loved having a fling with Princess Anne.

“But Princess Anne is quite a tricky character and she can be quite abrasive.

“Over the years, Camilla has been slightly intimidated by her.”

Charles and Camilla’s relationship was similarly brief, having first met in 1970, going on to have an on-off relationship for the next five decades before tying the knot in 2005.

Controversially, the pair remained close even when Charles married Princess Diana in 1981.

While he and Diana divorced in 1996, Camilla and Andrew had already parted ways a year before.

In the mid-Nineties, it was revealed that Charles and Camilla had rekindled their former relationship.

They eventually made their relationship public as they attended her sister’s birthday celebrations at the Ritz Hotel in London.

The couple were later granted permission to marry in a civil ceremony which the Queen, as head of the Church of England, did not attend.

In April, Charles and Camilla celebrated their 15th wedding anniversary while shielding together at Birkhall, Balmoral.