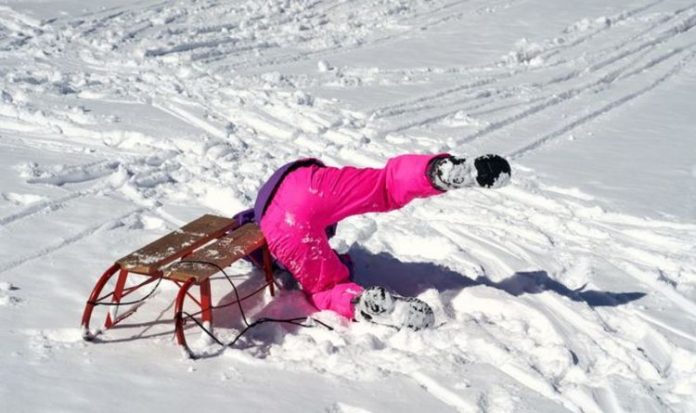 The recent snowy weather seen across the UK has delighted locked down Brits up and down the country. But as exhilarating as the snow has been, coronavirus restrictions are still in place, forcing police to issue a warning after hundreds of people descended on a park in Newcastle.

Pictures show large crowds congregating to sled and enjoy the unprecedented amount of snow in Town Moor and Flatts Lane Country Park on Wednesday and Thursday.

Under current coronavirus regulations, police can fine groups in an organised gathering, but these rules don’t apply to large crowds consisting of individuals or groups from households.

Police claim they were ‘outnumbered’ and that the gatherings were “taking up a lot of resources”, according to Cleveland Police.

One officer said: “If they’re not going to engage with us and we can’t explain and reason with them in an amicable manner we’re going to have to start taking names and addresses and issuing fines.”

Police have the power to disperse crowds and fine or arrest anyone refusing to comply, but only if they have a justifiable reason, such as crime or public disorder.

Northumbria Police reported it had dispersed crowds from the park on Thursday night. It also revealed it was planning extra patrols to monitor any further congregations.

The police also said it was aware of footage on social media “showing a group who appear to be partying on the Town Moor” on Wednesday evening.

A spokesperson said: “This type of behaviour is completely unacceptable and undermines the efforts of the majority of people in our region who are making daily sacrifices to prevent the spread of coronavirus.”

You are allowed to leave your home for the following reasons under current restrictions:

• Buying essential shopping and medical supplies
• Going to work or providing voluntary or charitable services
• Exercising, either alone, with your household or support bubble, or with one other person
• Meeting with your support bubble or childcare bubble where necessary, if you are legally permitted to form one
• To seek medical attention or avoid injury, illness or risk of harm, including domestic abuse
• Attending education or childcare, for those who are eligible.