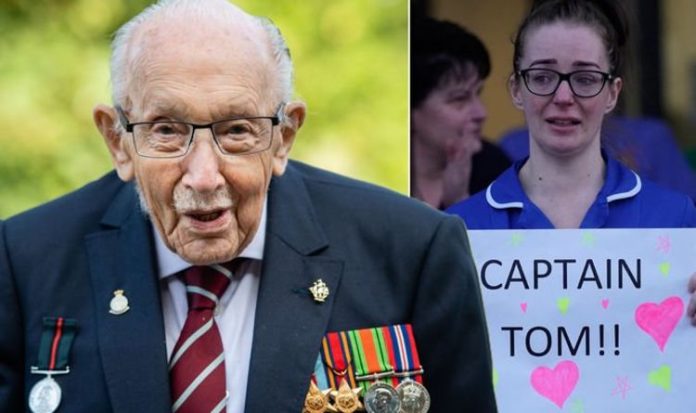 Captain Sir Tom Moore became a national treasure after raising millions of pounds for the NHS last year. But the Army veteran died on Wednesday February 2, after becoming infected with coronavirus.

Captain Tom vowed to walk 100 laps of his garden before his 100th birthday.

His aim was to raise £1,000 for NHS Charities Together, but quickly surpassed his target.

By the time he finished his loops of the garden, Captain Tom had managed to raise £32.8m.

His motivational message – “Tomorrow will be a good day” – started trending on social media, and raised the nation’s spirit.

A NHS Charities Together statement read: “The charity has been able to provide much-needed bereavement support for those who have tragically lost loved ones to COVID-19, though its member charities.

“Other projects have helped isolated patients in hospital, using technology to enable them to stay connected to loved ones at one of their most difficult moments.

“And thanks to the funds raised the charity has supported the emotional and practical needs of staff, including counselling programmes and helplines, so that they can focus on their life saving work at a time of immense pressure.

“The support of NHS charities will be crucial in the years ahead as the health service recovers from the most challenging period in its history. NHS Charities Together is continuing to work with member charities to ensure funds are used where they are most needed, now and in future.”

In total, NHS Charities Together managed to raise a huge £150m to support workers and patients.

More than £110m has already been made available to member charities, it confirmed.

NHS Charities Together is the national charity for the NHS, and has 241 member charities with hospitals, ambulance trusts, community health trusts, mental health trusts, and health boards.

He was being treated for pneumonia for a number of weeks, before testing positive for coronavirus, his family confirmed in a statement.

The national treasure needed extra help with his breathing, and was being treated at Bedford Hospital.

But, Captain Tom died in the hospital just a few days later, his daughters confirmed.