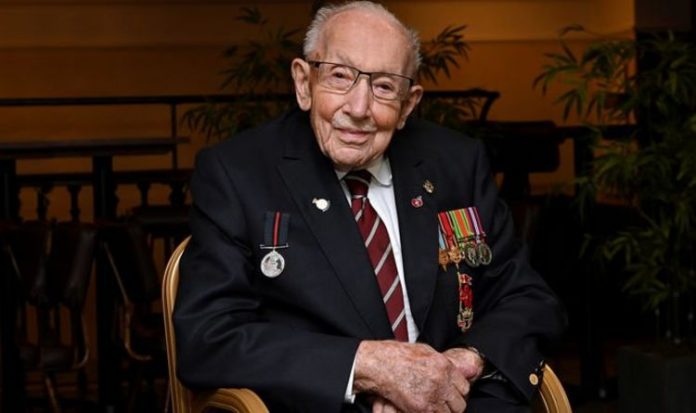 Tomorrow will be a better day, as he would say. Not just because of the £33million, plus £6million in Gift Aid, he raised for NHS Charities Together by walking 100 laps of his garden, but because of the inspirational example he set. “I’ve always considered that if things were very hard, don’t worry. You’ll get through them,” the Second World War veteran said in one of his TV interviews. “Don’t give in, just keep on going and things will certainly get better. That’s the way to look at it.”

He could never quite understand the worldwide fame he garnered in 25 remarkable days in 2020, though he enjoyed every moment of it. But with Britain “at war” with the coronavirus, and health workers manning the front line during the first lockdown, the country cried out for someone to come through with a message of hope.

Former Army dispatch rider Captain Tom had been there before, fighting in the jungles of Burma. And, in what was to be the last year of his life, his time had come again.

Born in Keighley, West Yorkshire, on April 30, 1920, to a builder dad and headteacher mum, he was a bright pupil at Keighley Grammar School and a prize-winning motorcyclist, having bought his first motorcycle aged 12.

He embarked on a civil engineering apprenticeship before the outbreak of war saw him conscripted in 1940 to his local 8th Battalion, the Duke of Wellington’s Regiment, aged 20, and he immediately determined to become an officer.

Lending his motorcycle so his regimental sergeant major could visit his sweetheart earned Tom a coveted dispatch rider role and he quickly won promotion to corporal, then a place at the Officer Cadet Training Unit.

Within six months he was a 2nd Lieutenant, heading to India with one of the Winston’s Specials convoys, and survived a bout of dengue fever in Calcutta (now Kolkata).

He was tasked with training soldiers for tank warfare against the Japanese in Burma (now Myanmar) until top brass realised tanks were unsuitable for the jungle and he began training dispatch riders.

He was sent to Burma with a small advance force shortly after the Japanese had overrun a British medical station, not only killing the handful of soldiers but bayoneting the doctors, orderlies and patients. “Our reaction was one of rage and a renewed determination to crush the enemy. Perhaps in light of what had happened, we were each given a tablet of cyanide, a lethal dose to swallow if we were captured,” he recalled in his autobiography, Tomorrow Will Be A Good Day.

He and his fellow soldiers survived a number of skirmishes in paddy fields, bamboo forests and the dense jungle of the Arakan, and in July 1944 he was promoted to Captain. As an Infantry Liaison Officer, he was “in effect, a dispatch rider who carried no dispatches or papers. I myself was the message,” he said.

There were no roads between command posts, just winding tracks through bamboo forest, but if he got through under the noses of the enemy, using skills learnt from riding the Yorkshire Dales as a teenager, then the infantry units would know the path was clear. He described it as “the most dangerous time trial of all”.

In 1945, he was moved back to Britain to train soldiers in the Churchill tank and felt bad because his comrades were still fighting in the Far East. It was known as “the Forgotten War” but Captain Tom said he never forgot.

After the war he joined the family building firm but it collapsed when he was 40, so he worked as a quarryman, a builder’s mate and a door-to-door bookseller before landing a job as a travelling salesman for a roofing supplies firm.

He had previously rushed into marriage to first wife Billie, then discovered she had anxiety problems and the marriage was never consummated. Nevertheless, Tom remained faithful and would have stayed with his wife if, after more than 15 years of marriage, she had not fallen for her psychiatrist.

Finally, he called time on the loveless marriage and, a year later, rekindled a friendship with Pamela, his former office manager who, he was amazed to discover, was still single in her early 30s, 15 years his junior.

She became the love of his life and when Billie refused a divorce, Captain Tom agreed to “stage” an adulterous affair with Pamela to secure one. They were married in 1968 and daughters Lucy and then Hannah were born not long after.

He became managing director of a concrete manufacturing firm and led a management buyout in 1983 – the year he charmed the audience on a Christmas episode of TV game show Blankety Blank. The firm was sold to ARC in 1987 and Captain Tom retired.

The family moved to Spain but when Pamela developed signs of dementia they returned to the UK so she could get the best NHS care. When she went into a care home he visited her for hours each day, feeding her when she could no longer feed herself.

Pamela died, aged 71, and Captain Tom moved to live with daughter Hannah and her family in Bedfordshire.

Even in his 90s he was still fit enough to drive, mow the lawns and wield a chainsaw as he tended the garden, though he developed skin cancer and had two knee replacements.

Then, aged 98, he had a fall and was treated by the NHS for a broken hip and punctured lung. He was still recovering, 18 months later, on April 5 last year during lockdown, when his family enjoyed a Sunday barbecue. Captain Tom ventured into the garden with his walker frame rather than do his daily exercises indoors. As he attempted a few laps of the driveway, grandchildren Benjie, 16, and Georgia, 11, gently teased him, and son-in-law Colin joked he would give Tom £1 a lap if he could do 100 by his 100th birthday.

He recalled: “As I kept walking, step after step, I began to think…what if I did raise a bit of money and gave it to the nurses and other healthcare workers who’d looked after me and my late wife Pamela over the years? That £100 would be a nice gesture.”

Hannah set up a fundraising page with a £1,000 target and within 24 hours Captain Tom was well on his way to £1,000. After BBC Breakfast presenter Naga Munchetty told social media she would be interviewing him, the donations soared and Hannah set her dad up with a Twitter account, which quickly had 50,000 followers.

The veteran reaches the finishing line for his 100th lap (Image: Daily Express)

His fundraising passed £250,000, then £1million, and still Captain Tom was shuffling his way to 10 laps of his driveway each day. He completed 100 laps on the morning of April 16, watched by a guard of honour from the 1st Battalion, the Yorkshire Regiment, and smashed the £5.2million record for a single fundraiser.

Michael Ball sang You’ll Never Walk Alone to him. By the following morning it had been recorded as a song with vocals by Michael, the NHS Voices of Care Choir and Captain Tom. It immediately shot to number one.

By the time he reached his 100th birthday on April 30, he had raised, with Gift Aid, an incredible £39million, from more than
1.5 million donors.

He received a personal letter from the Queen and was moved to tears by two military flypasts, the presentation of his missing Defence Medal and by being made an honorary colonel of the Army Foundation College in Harrogate. He received birthday wishes from England football captain Harry Kane, UN Secretary-General António Guterres, Prince Charles, Prince William and Boris Johnson.

Captain Tom, who was born when David Lloyd George was prime minister, said: “The thought that, 25 prime ministers later, the present incumbent of No 10 would wish me a happy birthday was astounding.”

Within three weeks he had been given a knighthood, conferred on him in July on the Queen’s first public engagement after lockdown.

More accolades followed, including a Pride of Britain award, a gold Blue Peter badge, and the freedoms of the City of London and of his hometown Keighley.

He had two buses, a train, a police dog, a rescue boat and a hospital garden named after him, and was heralded as GQ magazine’s Inspiration of the Year, becoming its oldest cover star.

But amid all the publicity, he never lost sight of why he started fundraising.

He said: “All of them, from top to bottom, in the National Health Service, they deserve everything that we can possibly put in their place. They’re all so brave. Every morning or every night they’re putting themselves into harm’s way.

“We’re a little bit like having a war at the moment. But the doctors and the nurses, they’re all on the front line, and all of us behind, we’ve got to supply them and keep them going with everything that they need.”

It seems a cruel irony that he should be struck down by Covid-19, but he died cared for by the NHS he so admired.

His one regret, expressed in his autobiography, was that Pamela was not around to see the astonishing amount he had raised.

He said he was not afraid of dying and often thought that when he did he would be reunited with loved ones who had died before him.

He wrote: “So, even if tomorrow is my last day, if all those I loved are waiting for me, then that tomorrow will be a good day, too.”