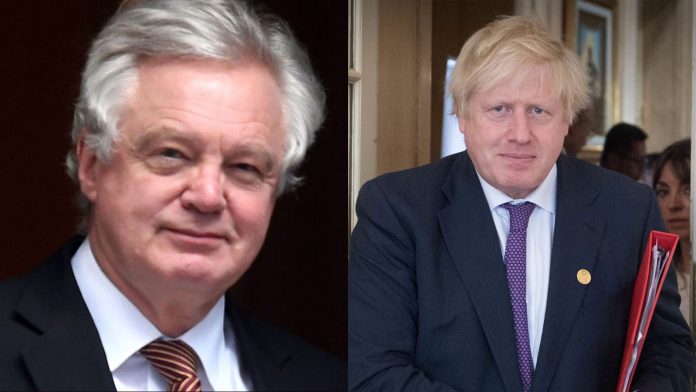 The Brexit white paper will still be published on Thursday despite concerns David Davis and Boris Johnson’s resignations would thwart the timetable.

A Number 10 spokeswoman confirmed to Sky News the white paper setting out the UK’s future relationship with the EU would be published as planned.

There was concern on Monday night that the plan’s delivery to the EU would be delayed after the Brexit secretary Mr Davis and foreign secretary Mr Johnson resigned.

Despite a “collective agreement” on the plan at Chequers last Friday the pair said they could not back the proposals, specifically the plan for a common rulebook for industrial goods and agricultural products.

On Tuesday morning Theresa May held her first cabinet meeting after the reshuffle.

Top Brexiteer Michael Gove, an ally of Mr Davis, Mr Johnson and also Mrs May, said everybody was “in very good spirits”.

He told Sky News he is “100% behind” Mrs May’s plan and is “absolutely not” thinking of resigning.

“I admire Boris and David very much and I’m sad they’ve left the government,” he said as he added that he did not think Mrs May was “in trouble”.

Mairead McGuinness, vice president of the European Parliament, said the fact the white paper will still be published on Thursday “bodes well” for ploughing ahead with presenting the plan to the EU.

She told Sky News: “I’m happy to hear it will be published on Thursday.

“I heard last night it might be delayed so I think it bodes well that we can sit down to hammer out a deal which is good for the UK and the EU.

“Our focus in the EU is on the agenda and the need to sit down with our partners and come to an agreement.

“The prime minister knows it’s a proposal and not an end agreement. Nobody would assume they would go in and walk out with the same agreement.

“We need to see the overall context.

“We just need to see flesh on those bones and work towards a deadline – which is fast running out of time.”

“I’d be interested to see the actual white paper because there may be some nuances in it which may make people feel a bit happier,” she told Sky News.

“I think what Boris said was, in a way, what a lot of people feel out there that somehow we should have been being much more up front and optimistic about our country.

“We’re a hugely important country in the world still and we should have been making much more of that.

“I think Dominic Raab will do a brilliant job of going in there and saying, ‘This is what we want, are we going to get it and if not we have some alternatives.'”