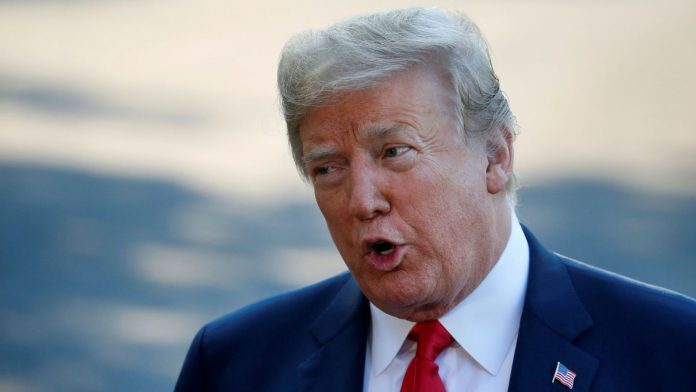 Donald Trump has waded in to the chaos engulfing British politics, saying that the UK is in “turmoil”.

The US president said it was “up to the people” whether or not Theresa May remained as prime minister.

Mrs May is attempting to shore up her position in Downing Street following the resignations of David Davis and Boris Johnson amid disquiet over her approach to Brexit.

Mr Trump insisted he got along “very well” with Mrs May – but he also described Mr Johnson as a “friend of mine”.

Speaking as he got ready to leave for a trip to Europe that will see him meet Mrs May at a NATO summit in Brussels and then make his first visit to the UK as president, Mr Trump suggested he could make time to see Mr Johnson.

Answering questions on the White House lawn before he and first lady Melania Trump boarded the Marine One presidential helicopter, the president said the UK “certainly has a lot of things going on”.

“We will work it out and all countries will be happy.

“So I have NATO, I have the UK – which is in somewhat turmoil.”

Referring to a planned summit with Russian President Vladimir Putin in Finland on Monday, the US president added: “And I have Putin. Frankly, Putin may be the easiest of all.”

When asked if Mrs May should be replaced, Mr Trump answered: “Well that’s up to the people. I get along with her very well, I have a very good relationship.

“That’s certainly up to the people, not up to me.”

Mr Trump said he had not spoken with the PM, adding: “Boris Johnson is a friend of mine. He’s been very, very nice to me, very supportive. Maybe I’ll speak to him when I get over there.

Mr Trump is due to hold talks with Mrs May at her country retreat of Chequers during his working visit, as well as meeting the Queen at Windsor Castle.

Widespread protests are planned across the UK.

Mr Trump also reiterated his calls for the EU to lower barriers to US imports and for other NATO countries to pay more towards their own defence.

“We do have a lot of allies, but we can’t be taken advantage of,” he said.

“We are being taken advantage of by the EU.

“We lost $151bn last year on trade and on top of that, we spend at least 70% to NATO and frankly it helps them a lot more than it helps us.

“So we will see what happens, we have a long, beautiful week.”