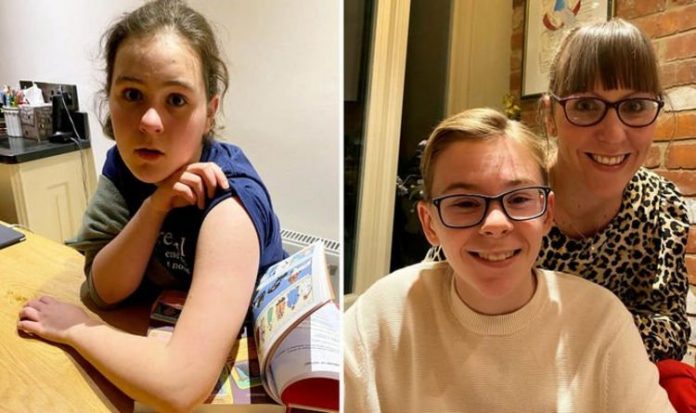 Scientists hope they will see a similar positive reaction to that of adults so children can be protected and help cut the spread. The volunteers, who live near one of four test centres, started receiving their first doses on Tuesday last week. Bertie Wood, 12, was among them after hearing his parents discussing it at home in Wallingford, Oxon.

He said: “No one had told me about it until I was being nosy! I said, ‘I really want to do it’, and was super excited.”

The schoolboy admitted the most thrilling bit of having the jab was getting to try out his signature on the consent forms.

He added: “I just thought that it would be nice to do my bit for science….I’m not that interested in science but I definitely am interested in doing my part.”

Mum Laura Wood, 42, is particularly proud that Bertie can list the ingredients in the vaccine.

Laura, who works in digital marketing, said: “I was talking about it [the trial] to my husband and Bertie heard it and said, ‘I want to do that’.

“My daughter is nine and she’s also requested to be put forward – but they’re doing the older age group first.”

She said her husband joined a trial for the Novavax inoculation of which the Government has secured 60 million doses.

Laura added: “We’ve reached that point now where if anyone can do anything to bring this to an end we’ll want to do it.”

Another volunteer is Phoebe Howard, 13, who had her first dose at the Churchill Hospital in Oxford – where her highlight was the hot chocolate.

She said: “As a younger person I don’t really get my chance to do what everyone else is doing to help everyone else. So I thought it was a great opportunity to do that little bit. The doctors and nurse were all really nice and it was cool.”

Her mother Dr Emily Lawson is the chief commercial officer at NHS England and responsible for vaccine deployment.

But Dr Lawson said she didn’t pressure Phoebe. She said: “I said ‘Would you be interested?’ And she said, ‘Yeah, yeah, OK’ – there was no conversation!”

She tweeted a photo of her daughter getting the jab and got a handful of negative comments, including from anti-vaxxers she reported.

Dr Lawson said: “I spend a lot of time trying to combat misinformation and I decided to post because I’m so proud of Phoebe – and because it’s important to show science will win.

“I’m proud that the UK’s got great scientists and robust clinical trials which will not only help in this country but globally.”