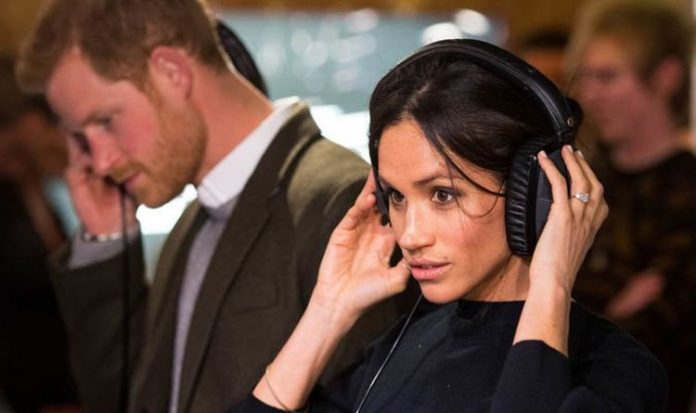 Meghan and Prince Harry’s contract with audio streaming giant Spotify has been criticised by Steve Brine, Tory MP for Winchester. Mr Brine was one of the members of Parliament leading an inquiry into how Spotify, Apple and Amazon distribute revenue.

Attending the digital, culture, media and sport (DCMS) committee’s latest session on the impact of streaming on Tuesday afternoon, Mr Brine voiced his views on the profitable deal between Spotify and the Sussexes.

Speaking to the platform’s head of global affairs and chief legal officer, Horacio Gutierrez, Mr Brine said their pay deal “sticks in the craw of some of the artists who are driving Uber cars right now to pay the rent”.

The size of the Duke and Duchess of Sussex’s contract was never revealed – but reports in December claimed it could amount to £18million.

Their arrival on the platform with a considerably-sized deal was not welcomed by all artists on Spotify.

Some musicians and songwriters complained that, while Meghan and Harry were able to strike a profitable deal, they receive royalties from streaming services so meagre they are struggling to make ends meet.

At the committee’s inquiry, Mr Gutierrez did not go into detail about the Duke and Duchess of Sussex’s deal, only saying: “They’re not doing it for free.”

And he defended Spotify’s decision to award Meghan and Harry a considerable deal, saying investing in podcasts benefited music consumption on the whole.

Meghan Markle and Prince Harry are to hosts and produce podcasts for Spotify (Image: GETTY)

Asked if the couple were regarded as “box office”, Mr Gutierrez replied: “Yes. In terms of the talent that goes into podcasts, yes.”

The Spotify chief likened Meghan and Harry’s presence on Spotify to major TV shows and productions on other streaming platforms.

He added: “Those high production shows that tend to be the tentpole that attract people into the service, and therefore benefit everyone.

“There is clear evidence that having podcast offerings on the service benefits music consumption, so on the whole there’s a virtuous cycle that occurs.”

Asked by Mr Brine whether Harry and Meghan were saving the music industry, Mr Gutierrez responded: “That seems a bit premature.

“They’re not the only act that we’ve signed, we’ve signed dozens of those and we’ll continue to do that.”

Mr Gutierrez also said podcasts have “a completely different set of economics” than other music side of the business, adding: “We don’t get to negotiate directly with artists the way we negotiate with podcasters or people who create podcasts so the structure of that market is very different.”

He also said: “The product is valued based on how many users it can attract, how many streams it will attract, which in turn determines how many advertisers are willing to advertise on the podcast which determines the economic opportunity, there’s a market that’s emerging for talent in that regard.”

In December, after Meghan and Harry’s deal with Spotify was announced, some artists compared their relationship with Spotify with the one the royals appear to have.

Eurovision winner Sandie Shaw told the Daily Mail: “Lucky Meghan and Harry were able to negotiate a podcast deal for themselves with Spotify.

“I wish recording artists were in the same independent position to negotiate streaming deals directly for themselves too.”

Singer Tom Gray said: “Young artists on Spotify would be lucky to make enough from streaming to pay their food bill, if that.

“This is probably something Meghan and Harry haven’t thought about, but it does call into question the ethics of the streaming platforms if they keep behaving like this, where they suddenly find tens of millions.”

During yesterday’s inquiry Spotify, Apple and Amazon bosses defended their streaming models – but agreed they could get together as an industry to explore other options.

Mr Gutierrez said Spotify would be “open-minded and be willing to explore and work with others” – adding any model would need to work globally and at scale.

Asked how it made him feel to learn songwriter Nadine Shah had claimed during the inquiry she has struggled to pay her rent with revenue from Spotify, Mr Gutierrez said: “It’s unfortunate that she feels that way but I think there are a couple of things that need to be clarified.

“I know what we pay, and I know that close to 70 percent of every pound that we generate gets paid to those intermediaries that represent artists.