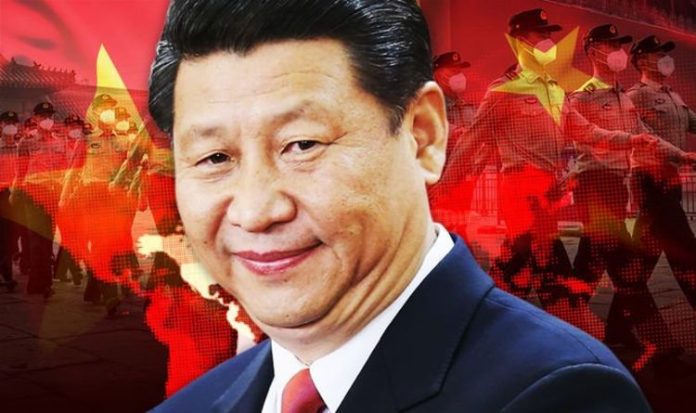 The October 2020 report from the National Bureau of Asian Research, conducted Nadège Rolland, warns China’s expansionism, “puts at risk not only the predominant US position in the current system but the fundamental principles underpinning the existing international order”. Ms Rolland, who has written several reports on China and served as an analyst and senior adviser on Asian and Chinese strategic issues to the French Ministry of Defense for a decade, is a senior fellow at the Washington-based research institution. In the report written as part of the NBR’s ‘China’s Vision for a New Regional and Global Order’ project, she warns the current world system headed by democracies such as the UK and the US is under threat from Beijing’s “illiberal authoritarianism”.

The US and its allies have been urged to avoid becoming reliant on China such as with the rise of Huawei 5G infrastructure.

China is hoping to “reshape, alter, and redefine elements of the existing world system to better fit its views and interests”, according to Ms Rolland’s report.

China has rejected the Western model is said to be attempting to emulate its imperial past by surrounding itself with “weaker” nations that will become reliant on the superpower.

The report stated: “China would be the biggest, most powerful, and most technologically advanced state, with smaller, weaker, subordinated states circling in its orbit.”

The report claims subordinate states under China’s helm would “have liberal democratic values and principles be suppressed”.

The report added China, “would also encourage others to mirror its domestic policies over a wide range of areas, including law and processes, education and media, development and aid, and industrial standards and norms”.

Chinese president Xi Jinping’s Belt and Road Initiative has been seen as the backbone of China’s new world order.

Beijing is said to be encouraging developing nations to acquire Chinese loans for infrastructure projects that tend to pull these nations into debt traps.

READ: Chinese virologist who claimed coronavirus was made in Wuhan lab suspended by Twitter

From the mid-1800s to the mid-1900s China lost territories to Russia, Germany, the UK and Japan in what Beijing has branded the “century of humiliation”.

The current leadership under Xi Jinping when challenged on their crackdown on freedom of expression and the many human rights abuses use the “century of humiliation” as a reason for their extreme actions.

This causes an emotive response in the Chinese psyche, that they will do anything to avert returning to the humiliations of the past.

It also accounts for China’s military build-up in the South China Sea and approach to territories such as Taiwan and Hong Kong.