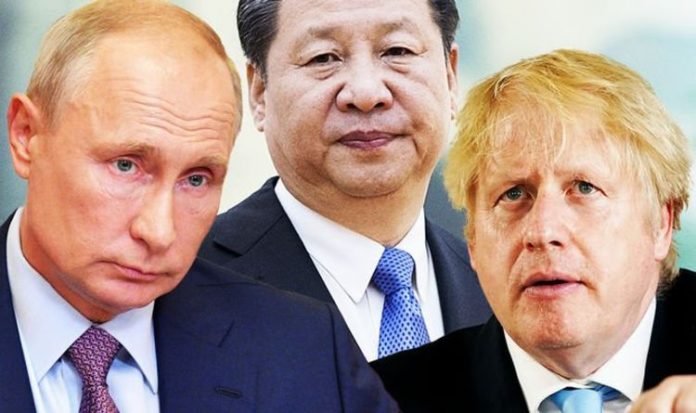 Russian and Chinese state actors have been accused of launching cyber attacks on the UK. Amid these threats, the former civil servant warned Britain had been “naïve” in dealing with the two states. Lord Sedwill, who served as Cabinet Security and National Security Adviser, under Boris Johnson and Theresa May, also claimed the West needs a strong America to lead the Western alliance.

Despite the upcoming election in November, Lord Sedwill also claimed the US-UK relationship remains to be stable and essential for Britain.

When asked by the BBC’s Laura Kuennsberg, Lord Sedwill rejected any idea that either Russia or China had become more aligned to the UK’s political values.

He said: “I think when we’ve allowed the rhetoric to suggest that countries with very different political systems, essentially authoritarian political systems, are edging towards our values and view of the world, then we’ve probably been mistaken and have overstated the natural alignment.”

Lord Sedwill did add, however, that despite the differing in values, the UK should still cooperate with the two countries.

But he concluded, the UK cannot be “naïve to the underlying nature” of their political systems.

Lord Sedwill left his post last month after announcing his intention to do so in June this year.

He was replaced as Cabinet Secretary by Simon Case, and as National Security Adviser, Lord David Frost – who leads the current Brexit talks.

Tensions between the UK, Russia and China have become frayed this year.

However, with the creation of the security law, some of these values have been violated, thus causing the uproar in the UK.

Following the removal of the extradition treaty with Hong Kong, China warned it could soon become hostile to Britain.

A spokesperson for the Chinese embassy in London said: “The UK government keeps making irresponsible remarks on Hong Kong affairs.

“But if you want to make China a hostile country, you will have to bear the consequences.”

Relations also became strained after the Government made the decision to remove certain Huawei kit from the 5G network.

The head of the MI5 also expressed similar fears over Russia and China.