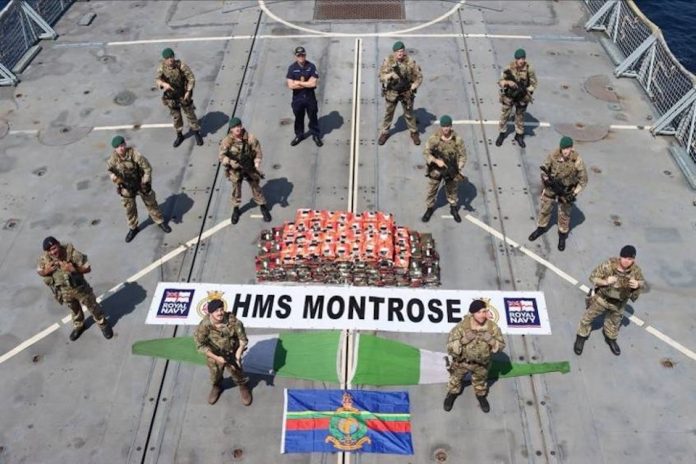 The operation, which was part of the Combined Maritime Forces’ (CMF) Operation SEA SHIELD, was an international effort involving several of the CMF’s 33 member nations and partners.

In rough seas, and aided by the ship’s Wildcat helicopter, sailors and Royal Marines conducted the boarding of the suspicious vessel, and during an extensive search discovered the 450kg haul hidden amongst the boat’s cargo.

Following several large drugs busts by the Royal Navy in the Caribbean, HMS Montrose has conducted the most successful counter-methamphetamine operation ever in the Middle East.

Intercepting and boarding suspicious vessels at sea is a skilled operation, made more challenging by the threat of COVID. The ship’s medical team was responsible for de-contaminating all personnel and equipment, and specialist PPE was used throughout the boarding process.

Every sailor and marine, airman and woman, alongside our international partners, should be proud to have contributed to the success of this operation which has undoubtedly kept millions of pounds of drugs off our streets.

For many of the Royal Marines in the team, this was their first operational tasking. It’s good to see all of our hard work and training come to fruition in an operational environment where we are truly making a positive impact to regional maritime security.

CMF is a multinational maritime partnership that works to counter illicit non-state actors in the Gulf region, promoting stability and security across some of the world’s busiest shipping lanes. The main focus is counter-narcotics, counter-smuggling, supressing piracy and encouraging regional co-operation in order to promote overall security and stability in the region.