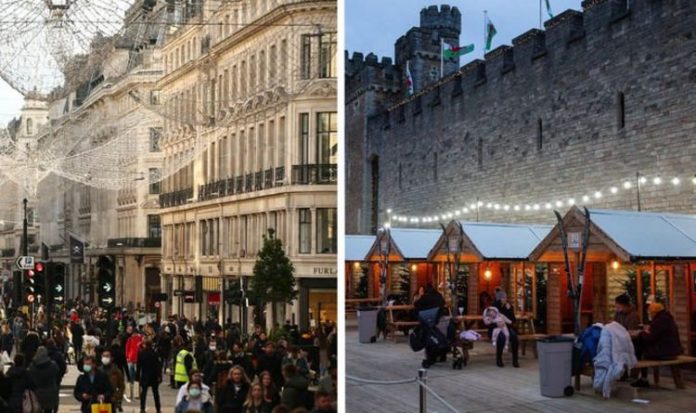 With less than three weeks until Christmas, shoppers were prepared to queue for bargains as they hit Oxford Street and Regent Street in London where hard-hit stores had deals of up to 80 per cent off. In Manchester, queues formed outside many stores including Primark and the soon-to-be-closing Debenhams. Football fans were allowed to watch live matches for the first time in the Premier League since a government plan to reintroduce spectators was ditched in October when the tier restrictions were brought in to control the spread of Covid-19.

In Wales, cafes, pubs, bars and restaurants were busy as drinkers made the most of it before a 6pm deadline on Friday, after which alcohol-based drinks are banned until at least December 17.

With pubs and restaurants also shut in Tier 3 areas across England, retail was the main beneficiary on the first non-working day for most people since the second lockdown ended onWednesday.

Yesterday was also the eighth annual Small Business Saturday, which takes place on the first Saturday in December and aims to boost smaller enterprises.

Since the lockdown lifted, people have been out spending (Image: Getty)

Michelle Ovens, director of Small Business Britain, said: “We are optimistic that this has been one of the biggest days for a long time for small businesses.”

The busy high streets and shopping centres came as a further 397 people died with Covid-19 and 15,539 new cases were reported yesterday.

As revealed by the Sunday Express several weeks ago, the Treasury also got a boost as the big four supermarkets, German discounters and other firms which did better than expected announced that they would repay the business rates relief received at the height of the pandemic.

Footfall figures from analysts Springboard showed that up until 1pm yesterday there was a 92 per cent increase compared with the previous Saturday morning across all retail in the UK.

This figure was only 26.7 per cent down compared with the same Saturday morning last year.

Shopping centres in England saw a 161 per cent rise compared with last Saturday and were only down 24 per cent on the same day last year.

High streets across England saw a 126 per cent rise compared to seven days earlier, down 34 per cent on a year earlier.

And in a regional breakdown, the West End in London and central London saw the biggest boosts in footfall – up 166 per cent and 149 per cent respectively on last Saturday morning.

Diane Wehrle, insights director of Springboard, said: “The results demonstrate a significant bounce back in footfall since retail stores reopened on Wednesday, but particularly so on Saturday.

“The average increase between Wednesday and Friday compared with the same days in the week before was plus-53 per cent but up to 1pm on Saturday footfall rose by plus 92.1 per cent. Overall UK footfall is still 26.7 per cent lower than last year but since retail stores in England reopened the gap between last year and this year has halved.

“That is just what retailers need in order to make up some lost ground due to Covid-19.”

Despite yesterday’s welcome retail boost, Andrew Goodacre, chief executive of the British Independent Retailers Association, fears that the collapse of Arcadia, Debenhams and Bonmarche last week will hasten city centres becoming “ghost towns” as a result of the pandemic.

He believes that Covid-19 has accelerated the shift to online trading and working from home.

He said: “City centres have got a real problem and could become ghost towns, because we have seen three big chains go and there could be more come January.

“Retailers on local high streets are in a good position to survive if they can get some government investment to help them adapt to the new retail world of trading online.”

The Arcadia group has gone into administration (Image: PA)

Mr Goodacre added: “Retail has never been boring but I think that we are in for probably the most interesting couple of years in seeing how this works out.”

But battling retailers will first have to get through the first quarter of next year, when it is estimated that about 20,000 shops and up to 100,000 businesses on high streets – which includes bars, cafes, barbers and salons – could shut due to the lost income of lockdowns.

Research by the Centre For Retail Research has shown that 20,622 stores had closed, with 235,704 jobs lost, by December 2 this year.

Many hospitals rely on agency nurses to fill the gaps in staff numbers, but many are now not available.

Patients have been left waiting for surgery and not knowing if operations will be cancelled, the sixth series of BBC Two’s Hospital showed. Filming in November, cameras for a future episode followed staff and patients at the Royal Free Hospital in north London to reveal a side-effect of the pandemic.

Rachel Anticoni, director of operations, said: “There is a national shortage of IT nurses. Perhaps a lot of staff that would normally have done agency are probably absolutely exhausted from that first wave, as are our permanent staff.

“If we fill up there will come a point where we would be unable to do any complex surgery that requires an ITU bed. Our workforce is our biggest constraint so we just keep going until we can’t really.”