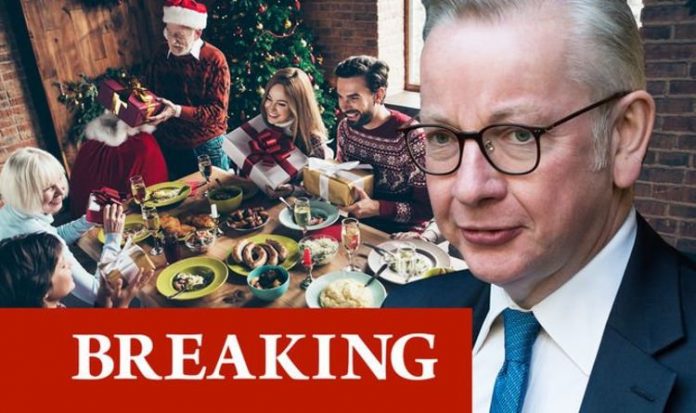 The Cabinet Office minister met with leaders of the devolved administrations over the weekend to agree “a shared objective of facilitating some limited additional household bubbling for a small number of days”.

But the public will be “advised to remain cautious” and told that “wherever possible people should avoid travelling and minimise social contact”.

A statement from the Cabinet Office said: “Welcoming the good progress made by all administrations over the past few days to design a single set of arrangements that can apply across the UK, ministers reiterated the importance of allowing families and friends to meet in a careful and limited way, while recognising that this will not be a normal festive period and the risks of transmission remain very real.

“As such, ministers endorsed a shared objective of facilitating some limited additional household bubbling for a small number of days, but also emphasised that the public will be advised to remain cautious, and that wherever possible people should avoid travelling and minimise social contact.

“In respect of Northern Ireland, ministers also recognised that people will want to see family and friends across the island of Ireland, and this is the subject of discussions with the Irish Government.

“Work is continuing to finalise the arrangements, including relating to travel.

“The UK Government, Scottish Government, Welsh Government and Northern Ireland Executive hope to conclude this work this week, subject to agreement by each administration.”

It comes as Boris Johnson is to reveal plans on Monday for a limited relaxation of coronavirus rules to allow some mixing between households across the UK for Christmas.

The Prime Minister will also set out a new tougher three-tier system for England when its national lockdown ends on December 2.

Chancellor Rishi Sunak today warned that “Christmas is not going to be normal” despite England preparing to move out of lockdown next month.

Mr Sunak told Sky’s Sophy Ridge On Sunday: “I think, frustrating as it is for all of us, Christmas is not going to be normal this year.

“But that said, the Prime Minister and everyone else, we’re looking at ways to see how families can spend some time with each other over (the) Christmas period.

“Obviously that’s something that we would like to do and it’s been a difficult year for all of us, but as I said it’s not going to be a normal Christmas this year.”

On Thursday, ministers will detail what tier each area will be placed into on Thursday under the more draconian system of local measures.

They are optimistic that restrictions can be gradually reduced in the run-up to spring.

If vaccines are approved by regulators, rollout will begin next month.

The Government on Sunday confirmed a further 18,662 coronavirus cases, while the death toll increased by 398.