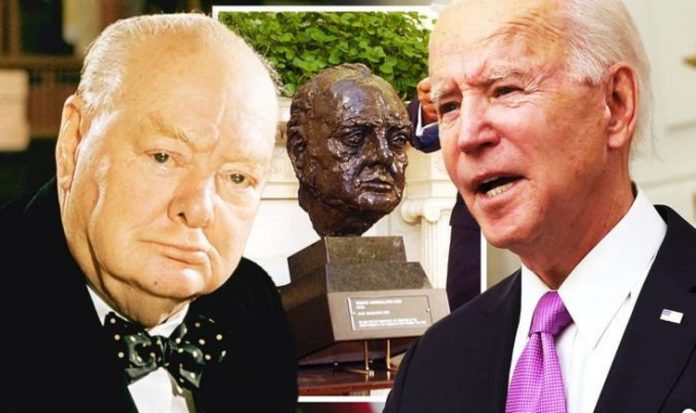 Brexit: Bill Cash says Churchill and Thatcher ‘would be proud’

Mr Biden was sworn-in as the new US President on Wednesday, replacing Donald Trump – and just hours later he began redecorating the Oval Office. The shake-up saw a bust of Sir Winston replaced by a statue of union leader Cesar Chavez, provoking concerns among some that it may be a sign that UK and US relations could deteriorate under the new President. Number 10 refused to criticise the move, despite Mr Johnson previously suggesting Barack Obama’s decision to display the bust in another part of the White House could have been be viewed as a “snub to Britain”.

The Prime Minister’s official spokesman said it was up “up to the President to decorate his office as he wishes”, and that Mr Johnson is “looking forward to working closely with Mr Biden”.

And former British Army officer and Government defence adviser Nicholas Drummond believes that view is reciprocated across the Atlantic.

He told Express.co.uk: “Churchill’s bust seems to be in favour with Republicans and out of favour with Democrats.

“I don’t think we need to read too much into its removal – it simply marks the changing of the guard.

“In any event, Joe Biden will want to put his own stamp on the Oval Office, if only to signal change.

“I don’t think it signifies a deterioration in the ‘special relationship,’ although some commentators might like to suggest otherwise, almost for the sake of controversy.

“Biden will want to acknowledge America’s closet ally and the fact that he plans to meet Boris Johnson first among European leaders, clearly shows that US-UK links remain strong.”

The two nations have been close allies during many conflicts in the 20th and 21st centuries, including World War 1, World War 2, the Korean War, the Cold War, the Gulf War, and the War on Terror.

But the idea of a ‘special relationship’ was first coined by Sir Winston in an interview with the New York Times in 1945.

A year later he used it during his Fulton, Missouri, speech in March 1946 when he spoke of “a special relationship between the British Commonwealth and Empire and the United States”.

The very hour that the US joined World War 2, Sir Winston invited himself to Washington DC.

On December 8, 1941, he wrote to former US President Franklin D. Roosevelt, claiming the pair “could review the whole war plan in light of reality and new facts,” in a proposal to sail across the Atlantic to meet.

After expressing concern over Sir Winston’s safety in the U-boat-filled ocean – a concern he waved off – Roosevelt then approved.

He replied: “Delighted to have you here at the White House.”

Sir Winston and Roosevelt hit it off (Image: GETTY)

The President and the Prime Minister would bond over late-night drinking sessions that annoyed the First Lady, taxed White House staff and forged the partnership that won the war.

But it was not just fun and games.

Sir Winston turned the second-floor Rose Suite into a mini-headquarters for the Government, with messengers carrying documents to and from the embassy in red leather cases.

In the Monroe Room, where the First Lady held her press conferences, he hung up enormous maps that tracked the war effort.

Sir Winston and Roosevelt would eat lunch together every day to update each other.

According to accounts, the legendary British leader would often suddenly declare, “I’ll be back,” in the mid-afternoon to take a two-hour nap.

He is said to have then kept Roosevelt up until two or three in the morning, drinking brandy, smoking cigars and ignoring Eleanor Roosevelt’s hints about sleep.

She later remarked: “It was astonishing to me that anyone could smoke so much and drink so much and keep perfectly well.”

But Nigel Hamilton wrote in his book The Mantle of Command: FDR at War, 1941-1942 that “the President did not share his wife’s shock, nor her barely concealed disapproval”.

He added: “He liked eccentricity, which made people the more interesting.”

That night, they gathered in the President’s study with diplomats from several Allied countries to sign a joint declaration that they would fight the Axis powers together, and that none would negotiate a separate peace.

The pact marked a historic development. It was called “A Declaration by the United Nations.”

After a short vacation to Florida, Sir Winston returned to Washington on January 10 to conclude the summit.

His three-week visit had been more beneficial than he could have ever envisaged.

He and Roosevelt agreed on several strategies that would end up making a difference for the Allies.

Sir Winston learned that despite Americans’ impatience for revenge against the Japanese, Roosevelt still intended to defeat Nazi Germany first, as the two leaders had agreed.

They also agreed to invade North Africa later in 1942, a move that proved an effective prelude to the Allied landings in Italy and France.

At Roosevelt’s insistence, Sir Winston agreed that a single command centre in Washington and supreme Allied commanders in Europe and Asia would coordinate the war effort.

The agreement deeply upset British military leaders, but Sir Winston waved off the criticism, saying it was a done deal already.

All the late nights took a toll on Roosevelt and his staff, though.

Aide Harry Hopkins reportedly checked himself into the naval hospital to recover.

But the bond formed during his stay would prove invaluable.

Roosevelt is said to have missed Sir Winston’s company, sending a message to him.

It reportedly read: “It is fun to be in the same decade with you.”

As history writer Erick Trickey put it in a Smithsonian Magazine article in 2017: “In the darkest days of World War 2, Winston Churchill’s visit to the White House brought hope to Washington.”