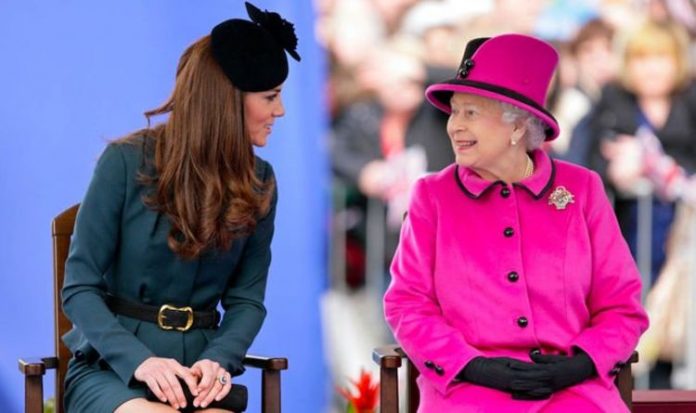 Kate and the Queen have remained in close contact since the pandemic began, according to royal expert Duncan Larcombe. The Duchess of Cambridge, he claimed, has a direct line to the Queen, which means she can call the 94-year-old monarch without being put on hold by aides and palace staff.

And Kate uses this privilege to ask the Queen for advice or keep her updated on the three little Cambridges – Prince George, Princess Charlotte and Prince Louis, according to the royal author.

Mr Larcombe told OK! magazine: “Kate has her own direct line to speak to the Queen and she calls her to check in on her and give her updates on the children.

“She always leans on her for advice.

“It’s believed Kate was the one to teach the Queen how to use Zoom and that’s been lovely, so she can see her great-grandkids and stay connected.”

According to Mr Larcombe, Kate and the Queen have a “fantastic relationship”.

He continued: “Kate strikes that balance between bowing to her as head of the Royal Family in public but being able to check in with her as the great-grandmother to her children.”

This comes after news the Queen has allowed Kate and William to use Sandringham House as their office during the third national lockdown.

The Duke and Duchess of Cambridge are spending lockdown at their home at Anmer Hall, a short distance from the Queen’s beloved home in Norfolk.

This concession is particularly significant for the importance Sandringham House has in the Queen’s personal history.

Her father King George VI died there on February 6 1952.

The Queen, traditionally stays in Norfolk until the anniversary of the death of her beloved father to honour his memory before returning to London.

This year, owing to the pandemic, the Queen and Prince Philip remained at Windsor Castle, where they have been self-isolating for the most part of 2020.

After hearing the heartbreaking stories of NHS staff holding hands of dying patients or comforting grieving families, the Duchess thanked them for their crucial work not just in the ward but also during the vaccination drive.

She said: “You hear time and time again about the amazing things nurses up and down the country are doing, going that extra mile.”

“And I think that’s what matters so much now, these acts of kindness to the patients you’re looking after, that are in your care, that family members aren’t able to be there, but you are going that extra mile and being there.”

The UHCW was put under the spotlight in December, when a nurse from this NHS Trust delivered the first Covid-19 vaccine to Margaret Keenan at the University College Hospital in Coventry.

A big part of Kate’s royal work since she joined the NHS has been focused on supporting the NHS and its staff.

In 2018 the Duchess, whose grandmother and great-grandmother were volunteer nurses, became patron of the Nursing Now campaign, which aims at raising the status of nurses around the world.

In April 2020, she supported with Prince William the platform Our Frontline, which provides support to frontline staff struggling with their mental health.

And in December 2020 she became joint patron of NHS Charities Together.