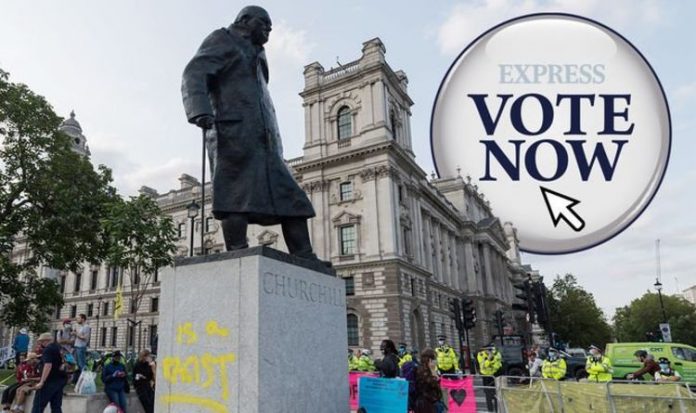 Under existing sentencing guidelines, judges have the power to jail vandals who damage war memorials and graves in England and Wales for up to 10 years. The sentencing powers introduced last October take into account the impact on the community, as well as the financial cost of the crime. Justice Secretary Robert Buckland and Home Secretary Priti Patel drew up the plans based on the response to the 2011 London riots.

In the latest attack – the second in three months – the statue of Britain’s wartime leader was defaced with yellow paint with the words “is a racist” scrawled on its plinth.

The vandalism has been condemned by politicians from all sides.

“It will be fully investigated and the statue will be cleaned as quickly as possible.”

The statue was vandalised as 10 days of Extinction Rebellion demonstrations in London ended with naked protests and more arrests.

Monuments, war memorial and statues have become a target for demonstrators this year, sparking calls for those who deface or damage them to feel the full force of the law.

He said: “Parliament Square is one of the most visual and visited places in the world, there are more cameras than almost anywhere else and they still get away with it.

“I am sure the police will say they will go back later and pick up the perpetrators.

“They need to stop it there and then and take more robust action immediately. “That is what the public expects from them.”