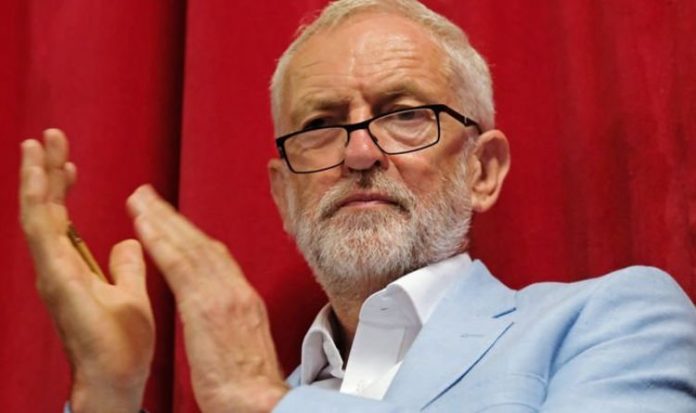 It is unlikely Mr Corbyn knew he was posing with a suspended Labour member but it comes after the the former opposition leader was suspended from the Labour Party last week following an investigation into antisemitism by the Equalities and Human Rights Commission (EHRC). Mr Corbyn claimed antisemitism during his leadership was “dramatically overstated for political reasons”.

The findings from the EHRC found the Labour Party had breached the law.

But Mr Corbyn’s suspension came as a result of his reaction to the findings.

The former Labour leader said: “Anti-Semitism is absolutely abhorrent, wrong and responsible for some of humanity’s greatest crimes.

“As Leader of the Labour Party I was always determined to eliminate all forms of racism and root out the cancer of antisemitism.

“I have campaigned in support of Jewish people and communities my entire life and I will continue to do so.

“The EHRC’s report shows that when I became Labour leader in 2015, the Party’s processes for handling complaints were not fit for purpose.

“Reform was then stalled by an obstructive party bureaucracy.

“The scale of the problem was also dramatically overstated for political reasons by our opponents inside and outside the party, as well as by much of the media.”

“But never mind: I hope your batteries were recharged and you had a rest, anyway.”

Mr Smith, a nudist and die-hard Corbynite, is also currently suspended from the party and under investigation after being accused of antisemitism on social media.

Just days ago, the nudist shared a cartoon of the Israeli Prime Minister flying an IDF jet which was firing “defamation” missiles at Mr Corbyn, Guido Fawkes reported.

Following Mr Corbyn’s suspension, a petition was set up by Labour MP John McDonnell calling for the former Labour leader to be reinstated.

“He has always stood with us. We must stand with him #IStandWithJeremyCorbyn.”

The Shadow Chancellor is also facing suspension – according to Jewish News – after signing a letter claiming antisemitism has been “weaponised”.

Mr McDonnell co-signed a letter by Progressive International which stated Mr Corbyn “not only spoke out about the ills of antisemitism in British society broadly.

“He also took the issue of antisemitism in his own party seriously, listening to the concerns of Jewish constituents and improving the process for investigating and sanctioning cases of antisemitism.

“As fierce opponents of antisemitism ….we abhor the weaponisation of Jewish pain against the project of socialism and the legacy of Jeremy Corbyn’s leadership in the United Kingdom.”