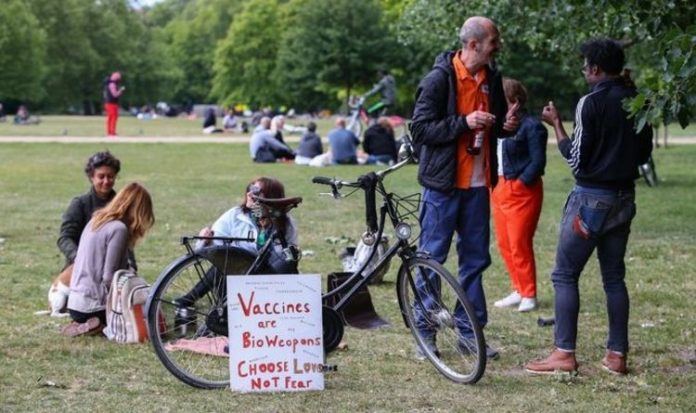 A recent survey by King’s College London and Ipsos MORI showed only 53 percent of the UK population are “very likely” to get the COVID-19 vaccine, once it’s on the market. Younger voters were twice as likely to oppose the vaccine in the poll of 2,237 people aged between 16 and 75. To gauge readers’ views on the topical issue, Express.co.uk conducted an exclusive poll asking: “Should Britons be forced to have the coronavirus jab once it is developed?”

Sixty-five percent (2,906) of respondents said no, with many saying they would have to be dragged kicking and screaming to have the vaccine administered.

Thirty-four percent (1,617) said a compulsory vaccine programme should be rolled out across the UK, one of Europe’s hardest-hit countries since the beginning of the pandemic.

One reader said they would not feel safe having a coronavirus vaccine injected into their body because they simply cannot trust pharma giants.

They said: No vaccine, whose manufacturer demands an indemnification, can be trusted.”

A second person said any attempts to force a vaccine on Britons as the country returns to the new normal would cross a dangerous line in the sand.

They said: “Forced vaccinations will mark the transition of Britain from a representative democracy into a totalitarian technocracy.”

One 71-year-old diabetic man acknowledged he was in the high-risk category for the disease.

But he insisted he would rather gamble with the potentially deadly infection rather than be injected with a vaccine.

He explained: “They are pointless as the germs mutate too rapidly for the vaccine to keep up.

“On the other hand, they put mercury and other aggressive antagonists in the vaccines to trigger an immune system response.

“Who knows what damage this does to us?

“I would rather take my chances and accept that if my time to die has come, so be it.”

Another staunch opponent of vaccines said they would be willing to “go to prison before I let you jab me”.

A total of 4,583 readers took part in the ballot which ran from noon until 9pm on Sunday August 9.

The results came as a top doctor quashed fears of a second wave of the virus in the UK as he said the country was nearing herd immunity.