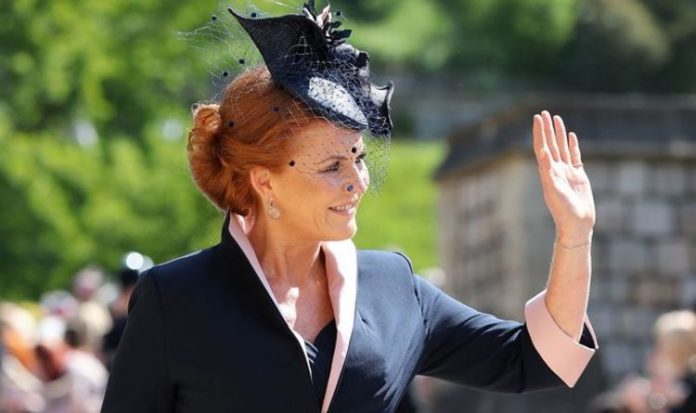 Edoardo Mapelli Mozzi became the Duchess’ son-in-law after marrying her daughter Princess Beatrice in a low-key wedding last month. Jack Brooksbank is Fergie’s other son-in-law as the husband of her other daughter, Princess Eugenie.

Together with Mr Brooksbank and Mr Mapelli Mozzi, the Duchess started up a new company earlier this year.

The company is called Rumpel Water Ltd. Little information about what the firm does is publicly available, but a spokesman for the Duchess said it involved “water-cleansing”.

It is understood the company’s main activities could be based overseas, but the company is in a state of dormancy for the time being.

As to why Fergie’s two son-in-laws decided to resign from their posts, the Duchess’ spokesman said they simply “didn’t have enough time to commit to it.”

Company records show Mr Mapelli Mozzi and Mr Brooksbank both resigned as directors of the company on July 13 – less than one month after they were appointed to the posts.

Both men have active careers of their own. Mr Mapelli Mozzi is director of London-based property development firm Banda – a role he has held since 2007.

Fergie has expressed her fondness for Mr Brooksbank in the past. In an interview with the BBC, she said: “Jack is a really sort of amazing bringer of light and he brings joy.”

She is the creator of the Budgie the Little Helicopter children’s book series, which was adapted by ITV into a TV series in the 1990s.

This year, the Duchess announced she would release a new title in the series: ‘Budgie – Turtle Rescue’.

She told the Daily Mail’s Sebastian Shakespeare: “I’ve never been more proud than total to see my friend Budgie flying to the rescue.”

The Duchess said proceeds of the book would go towards her charity, Sarah’s Trust, as well as to help fight global plastic pollution.

She also signed a publishing deal with Australian publisher Serenity Press for seven books, according to reports.

Serenity Press publisher Karen McDermott said the company was “delighted” about the deal.