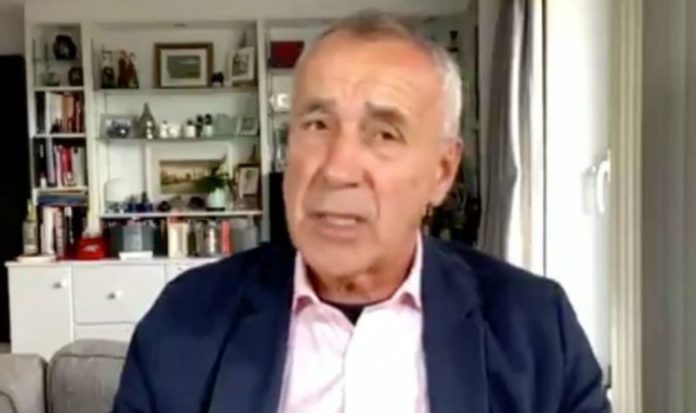 The warning comes from former NHS chairman Roy Lilley who told TalkRADIO the issue with overloaded NHS waiting lists is to do with the social distancing measures imposed on hospitals and medical staff throughout the coronavirus pandemic. He warned some hospitals have had their capacity reduced by more than 30 percent due to coronavirus measures and said the waiting list for non-COVID appointments could reach 10 million people by Christmas.

He said: “They reckon the waiting list now is about six million.

“By Christmas there are people saying it could be 10. Who knows.

“But, of course, if you’re on the waiting list then you have to go through the procedures of having your tests and your scans and your imaging.

“The doctors have to figure out if your lump is or isn’t cancer.

“There’s a whole procedure to go through. The problem with this is the NHS is working under the same social distancing rules in governance as a hairdresser or a pub.”

The Royal College of Anaesthetists (RCoA) and the Faculty of Intensive Care Medicine said a “worrying” rise in coronavirus patients being admitted to hospital is putting pressure on intensive care units which could lead to a further surge in surgical waiting lists.

Hundreds of thousands of vulnerable people living in coronavirus hotspots could be told to shield this winter under plans reportedly being considered by the Government as infections continue to soar.

It comes as a minister acknowledged the situation was “getting out of control” and said action from Whitehall was required.

Ministers are expected to outline a three-tier local lockdown system next week, which may see those most at risk if they catch COVID-19 being told to stay at home for months.

Professor John Edmunds, a member of the Government’s Scientific Advisory Group for Emergencies (Sage), said coronavirus was “holding a gun” to Boris Johnson’s head over the restrictions being introduced, adding that the nation faces an anxious wait to see the full impact on the NHS.

He said: “In the north of England now, we are not that far away from the health service being stretched.

“Because even if we turn the epidemic around now, infections that occur today won’t go to hospital for another week or two.”

Dr Stephen Griffin, associate professor in the School of Medicine at the University of Leeds, said the increase in cases should “serve as a warning to the Government to take further action without delay”.

“It is clear that the consequences of not suppressing infections sufficiently over the summer may be severe if we cannot get on top of this increase,” he said.