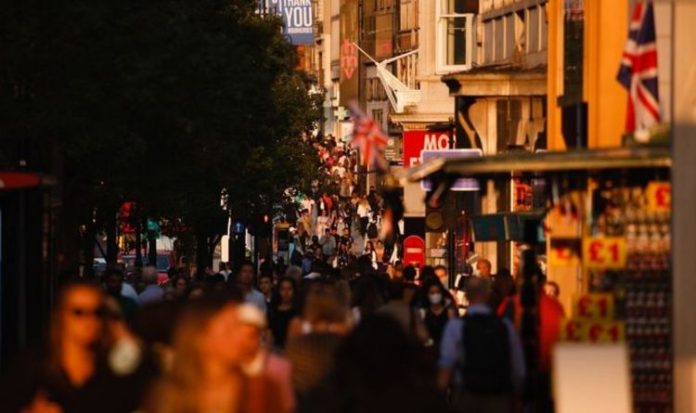 The gloomy data shows 161 cases per million people in the UK yesterday – 20 percent more than the 134 cases per million reported in the US in the same 24-hour period. It is the first time Britain has recorded more infections per capita than the US since the pandemic began to sweep across the country.

Britain yesterday recorded a further 14,162 lab-confirmed cases of coronavirus in the UK with the number of people testing positive for the disease every day having tripled in a fortnight.

The Government also said a further 70 people had died within 28 days of testing positive for COVID-19.

The fresh data has sparked fears the second wave of infections has become worse than the crisis in the US which has the highest number of deaths and cases of anywhere in the world.

Professor Calum Semple, a member of the Government’s scientific advisory panel who specialises in disease outbreaks, recommended a “circuit breaker” short national lockdown should be considered to slow the virus.

Speaking in a personal capacity, Prof Semple – a member of the Scientific Advisory Group for Emergencies (Sage) – told BBC Radio 4’s Today programme: “It’s always easier to reduce an outbreak at the earlier stage than to let it run and then try to reduce it at a later stage.

“So, yes, circuit breakers are certainly something we should be thinking about on a national basis.”

Professor Paul Hunter, a medical expert and epidemiologist from the University of East Anglia, said: “The UK was probably always going to have a higher infection rate than the US because of our much greater population density, but of course other things are not equal.

“We had a much stronger population wide lock down from late March. It is too early to say what will happen in the US over then next couple of months.”

Britain is also catching up with France and Spain, which have been hit hardest by the second wave of the virus rolling through Europe.

Health Secretary Matt Hancock is expected to unveil details of a three-tier COVID-19 alert system this week to make the existing restrictions easier to understand.

Government sources said the top tier would include tougher restrictions than those affecting millions in the North and Midlands.

The new measures could include the closure of pubs, restaurants and cinemas, a ban on social mixing outside household groups and restrictions on overnight stays.

Sources refused to rule out the possibility that some towns and cities could be placed immediately into the top tier.