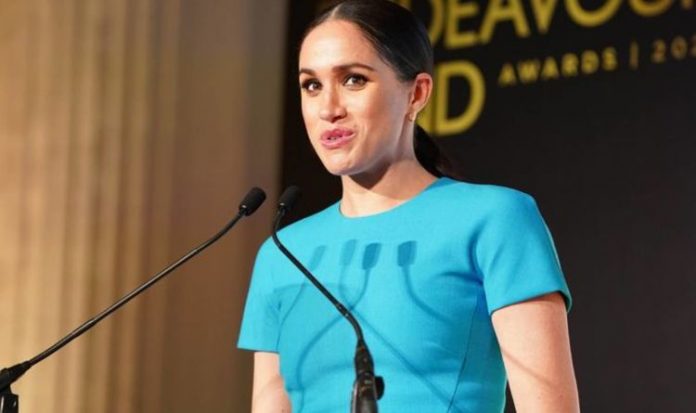 The spoof site called Meghan for President 2020 has appeared online just 27 days before American voters take to the polls. The website, which is believed to have been set up by fans of the Duchess of Sussex, is filled with photographs of Meghan meeting world leaders and influential figures. There are also a number of inspiring quotes, including “A brighter tomorrow begins today”.

The Meghan for President website also includes a fabricated message claiming the Duchess made the decision to run for the top job over the last few months.

The post said: “After many months of reflection and internal discussions, I have heard your calls to become President of the United States of America.

“It is with your encouragement, particularly over the last few months, that I feel prepared to make this decision.

“With your support I believe we can bring equality, empowerment, and kindness to this dangerous, aggressive and confrontational world we live in.”

The post ended with the slogan: “Together, we will lead.”

Visitors to the website are encouraged to fill out a box for volunteering services.

The site also features a button for people to “contribute”, although this link does not lead to anything.

Twitter users were quick to point out the Duchess should not run for US President while she still has her royal title.

However, some Twitter users appeared to be warming to the idea of Meghan as a potential candidate.

Another added: “My vote!”

And a third said: “If she can withstand the intense scrutiny, she should definitely go forward.”

Vanity Fair’s Katie Nicholl claimed last month the former actress could consider a role in politics if she gave up her title.

She said: “One of the reasons she was so keen not to give up her American citizenship was so she had the option to go into politics.

Although another source later came out and disputed this saying Meghan wasn’t interested in a political career.