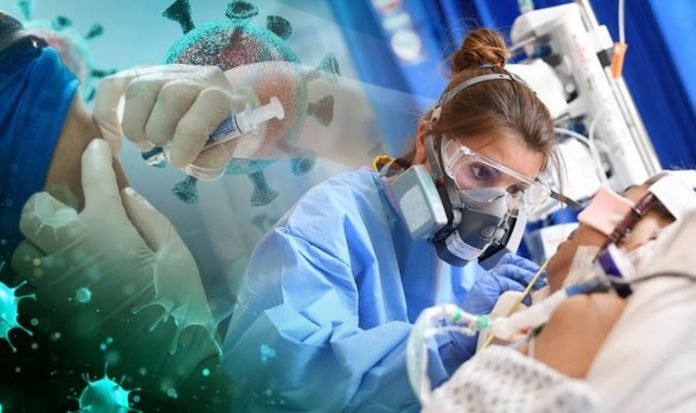 The grim milestone comes amid a second wave of COVID-19 cases in Europe, with the UK announcing a further 5,693 cases and 17 deaths. Prime Minister Boris Johnson has moved to try and curve the effects, introducing a swathe of new restrictions after warning the country faced a “perilous turning point” in its battle with the virus. From 10pm closing times for pubs and bars, to stricter rules on masks and group sizes, the rules are getting tougher again as infections rise.

The Prime Minister clamped down on the British public after the alert level was escalated from three to four, meaning the virus was spreading rapidly again.

The World Health Organisation (WHO) reports the worldwide circulation of influenza virus to be much lower than expected for this time of the year, thought to be largely attributed to the social distancing and hygiene protocols implemented for COVID-19.

But, an article in the peer-reviewed medical journal ‘The Lancet’ warns “this low circulation of influenza virus could be matters of both reassurance and concern.”

It goes on to state that the potential impact of altered infection testing priorities, health-care personnel capacity, and health-seeking behaviours during the pandemic should not be ignored.

The UK could be heading for a ‘double epidemic’ (Image: GETTY)

Head of Influenza and other Respiratory Viruses Section at Public Health England, Richard Pebody, said: “We need to bear in mind that the measures we’re putting in place to control COVID-19 may have some benefits for the flu as well.

“But with the resurgence of COVID-19, there may also be a double epidemic of flu and COVID-19 during the northern hemisphere winter.

“All that we can do about it is to be ready and prepared with a range of measures we’ve got in our community ammunition box.”

One way to prepare for such a situation is to ramp up testing capabilities for both COVID-19 and seasonal infection, but that has already proven difficult in the case of the prior.

The paper suggests that combination testing for both COVID-19 and influenza could also be beneficial, as a single sample could be used to distinguish the two infections in patients presenting with similar symptoms.

There are stricter repercussions for not following the rules (Image: GETTY)

The US Food and Drug Administration (FDA) issued the third emergency use authorisation in July for such a combination test, which is yet to be rolled out.

And a UK equivalent of the test is expected to be available in NHS hospitals this month.

Nidia Sequeira Trovao, from the US National Institute of Health, Washington, added: “It would be great if other countries and agencies would pursue developing more combination tests.

“Assessing for multiple diseases in a single swab can also help reduce the demand for testing supplies and reduce the risk of exposure to health-care workers collecting the sample.”

Experts have also warned that existing vaccination programmes should be stepped up to avoid such a situation.

A test for coronavirus and the flu could soon be rolled out (Image: GETTY)

Pasi Penttinen, from the European Centre for Disease Prevention and Control, said: “We’ve got several questions in the air for what will happen in the next season but having COVID-19 and influenza circulate at the same time is really something that you want to avoid as much as possible.

“But for influenza, we’re lucky to have a vaccine and now the debate among public health authorities is how to broaden the flu shot target groups from the current consensus.”

Currently, health care workers are first in line for COVID-19 care and are expected to be mandated for influenza shots.

But, vaccinations of children is also becoming a debated topic.

In the 2017–18 influenza season, only six countries in the EU recommended vaccination of children.

Restrictions in place could lower the effects of the flu season (Image: GETTY)

Dr Penttinen thinks that “it is a question that countries should have right now because vaccinating children against influenza reduces their risk of transmission of flu to the elderly and thus protects them better than direct vaccination of the elderly”.

However, expanding influenza shot programmes comes with a price.

The report explains that several countries have likely already placed their orders for the vaccine before the pandemic, so increasing the demand now could lead to a vaccine shortage.

Also, realigned resources to vaccination programmes during the pandemic might have a negative impact on the response to COVID-19, according to the expert.

Experts are still working on a vaccine (Image: GETTY)

Dr Penttinen added: “So countries are faced with a very difficult dilemma here in terms of how much effort to put into the influenza vaccination program in this situation.”

But, overall, Professor of Medicine at the University of East Anglia, Paul Hunter, thinks the current measures in place should be sufficient to prevent a serious double epidemic.

He said: I think the feared double epidemic will probably not happen since the continuing social distancing that we are likely to see well into next year should be sufficient to suppress any influenza epidemic.

“It would be a shame if we get through COVID-19 only to be hit harder by influenza the following winter season.”