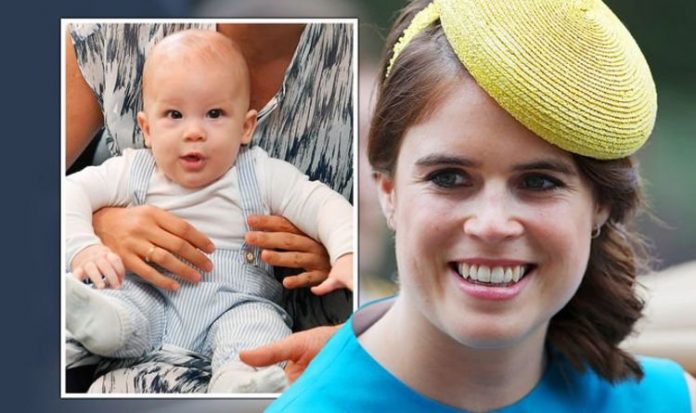 Princess Eugenie has announced she is expecting a royal baby with her husband Jack Brooksbank. The royal baby will join a long line of young tots currently in the family and will have eight other youngsters to play with once they arrive in early 2021.

Buckingham Palace announced the good news on Twitter, saying: ”The Duke of York and Sarah, Duchess of York, Mr and Mrs George Brooksbank, The Queen and The Duke of Edinburgh are delighted with the news.”

“Jack and I are so excited for early 2021,” she captioned a photo of her and Mr Brooksbank holding up a pair of baby slippers.

The royal baby will be the ninth great-grandchild for Queen Elizabeth II, 94, and Prince Philip, 99, and the first grandchild for Eugenie’s parents, Prince Andrew, the Duke of York, and Sarah Ferguson, the Duchess of York.

Archie also does not have a title. The Duke and Duchess of Sussex decided not to give their son a title so that he could grow up a private citizen.

However, the Queen had offered to give Archie a title – and the little royal could even become a Prince when he’s older if Prince Charles chooses to extend the title to his grandson.

Archie may also take on another official title in the future as he is heir to his father’s dukedom, however, a royal commentator has claimed the move “unlikely” given that Archie is expected to have an upbringing that is deliberately not rooted in royal tradition or custom.

Royal commentator Richard Fitzwilliams said: “When Archie was born Harry and Meghan did not want him to use a title though he could have taken his father’s subsidiary title of Earl of Dumbarton.

DON’T MISS
Princess Eugenie: What will the royal baby be called? All the hints [ANALYSIS]
Meghan Markle and Harry: Will royals lose their titles? Shock poll  [INSIGHT]
Lady Louise: Royal opens up on A-level subjects after GCSE results [REPORT]

Princess Eugenie, who is tenth in line to the throne, married Mr Brooksbank at St George’s Chapel in Windsor Castle in October 2018.

Her mother, Sarah, Duchess of York, also tweeted her congratulations, saying: “I am so excited by the news that Eugenie and Jack are expecting their first child.