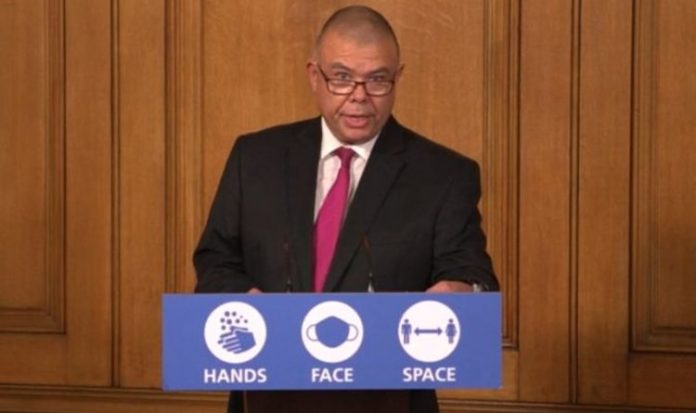 The tragic daily toll was up 69 percent compared to a week ago, while cases increased by almost a quarter. Officials warned the trend in deaths was rising sharply – particularly among older age groups. Deputy chief medical officer Professor Jonathan Van-Tam said: “Part of that surge in deaths is related to the weekly pattern of slightly lower figures at the weekend, and then a catch-up earlier in the week.

Figures for the last two weeks showed the problem area where cases were too high had extended from coast to coast. He said: “It extends quite a long way down the country.”

But he added that the picture was more mixed when it came to the rate of change and there were more places where cases appeared to be falling in the week to October 14.

When it came to age groups, weekly infection rates had decreased among 10-29-year-olds but were still climbing in older age groups.

Prof Van-Tam said: “This really shows us that the infections which have seeded in the younger age groups are now penetrating those older age groups. These are cases. That means that the hospital admissions and the deaths, sadly, that are linked to those cases, are now baked in for the next two to three weeks.”

He added that there had been “very, very large and very steep” increases in hospital admissions among all age groups over 65.

Latest figures showed 6,431 Covid-19 patients were in hospitals on Sunday, including 629 in mechanical ventilation beds.

Professor Stephen Powis, NHS England’s medical director, warned some areas were not far off the number they treated during the first peak.

He said Liverpool University Hospitals NHS Foundation Trust was likely to have as many Covid-19 patients by today as it did at the peak in April.

He added: “That shows just how fast we can see infection rates and hospital admissions rise if we don’t get this under control.”

Meanwhile, hospitals in Greater Manchester were managing but had seen numbers on wards almost double from 330 to 620 in two weeks.

Prof Powis said: “Another two weeks, if that doubles again then we’re into 1,200 or so. At the very peak in Greater Manchester on April 18 there were 1,277 patients in their hospitals.

“In two weeks we could be seeing, at the current rise, the numbers in hospitals in Greater Manchester that we saw at the peak in April.”

She said: “Tragically we know that older people and those with underlying health conditions tend to suffer more if they become unwell.

“We all have a responsibility to follow the restrictions to help stop the virus spreading to those who are at greater risk.”

Meanwhile, it was announced that the NHS is investing £15million to strengthen mental health support for staff as they deal with the second wave of Covid-19.

The money will ensure that anyone who is struggling can be rapidly assessed and treated by local mental health specialists, NHS England said.

It will also fund outreach work to support those most vulnerable to trauma, including critical care staff, and roll out wellbeing and psychological training.

NHS England’s national mental health director, Claire Murdoch, said: “It is crucial the NHS staff working tirelessly to protect the health of the nation throughout this pandemic are given the support they deserve, which is why we are announcing this expansion of services.

“Frontline workers are the backbone of the NHS, from porters and cleaners to nurses, doctors and therapists, and this funding will ensure they are supported while they continue to care for the thousands of patients who rely on the NHS.”

The announcement came as experts raised concerns over debilitating levels of stress among NHS staff, exacerbated by staff shortages.

Professor Michael West, of think tank the King’s Fund, told MPs on the Health and Social Care Committee that staff stress was already at the highest level in over a decade in January.

Previous research found 41 percent of NHS staff had been unwell from work stress in the previous year, rising to 44 percent among nurses and 51 percent among midwives.

He said: “We had a shortage of 100,000 staff at the beginning of the pandemic back in January, that’s something like one in 10, one in 12 staff across the NHS.

“That’s placing enormous pressure on existing staff and is contributing to the chronic excessive workload.”

Prerana Issar, chief people officer for the NHS in England, told MPs that staff health and wellbeing was a priority and work was under way to try to “normalise” help-seeking behaviour among staff.

Since April measures have been introduced to support NHS employees, she said.

This included free mental health apps downloaded by 150,000 workers and resources, such as advice on how to talk to a child about Covid-19, which have been used a quarter of a million times.

Staff also have access to a text support service and a helpline created in partnership with the Samaritans.