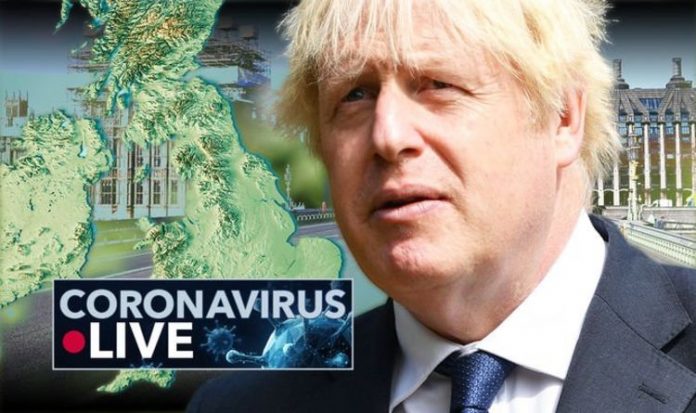 Areas under consideration include Blackburn and Darwen along with Pendle and Oldham, following a spike in new coronavirus infections. Data released by Public Health England reveals there was more than 300 new cases in these northern towns in seven days.

In Oldham, officials recorded 200 new cases with a further 114 people testing positive in the Blackburn area.

The seven-day rolling data measured the number of new cases per 100,000 people between August 9-16.

Meanwhile the highest rate was recorded in Northampton with 262 new cases in the same period following an outbreak at a sandwich factory.

The prospect of another lockdown in the north of England has divided the scientific community.

Oxford University Professor Carl Heneghan has urged the Government to resist and back its track and trace system.

He told BBC Newsnight: “The government has got this wrong by focusing on the number of cases.

“If I look at the number of people in hospital right now, there are about 1,250 people across the Pennine trust; only nine of them have COVID-19 in a bed today.

“The virus at the moment is circulating at a low level. Oldham should be allowed to let their test and trace system function and get to work.”

9.40am update: Students receiving top grades in GCSE soars to a record high

The number of students in England awarded top grades in their GCSE results has surged to a record high, after pass marks were based on teacher assessments following the cancelation of exams due to the coronavirus pandemic.

More than one in four (25.9 percent) of GCSE entries in England scored one of the three top grades this year, up from just over a fifth (20.7 percent) last summer, figures from exams regulator Ofqual show.

The proportion receiving the top grades – at least a 7 or an A grade – was a record high after the Government made a U-turn on using a controversial algorithm.

More than 76 percent of entries were awarded at least a 4 or a C grade in England this summer.

The figure is higher than last year when just 67.1 percent of students achieved a C or above.

9.20am update: Health chiefs refuses to rule of face coverings in workplaces and schools

Face coverings in workplaces should not be ruled out in Scotland and could be considered in secondary schools to help keep them open, a public health expert has said.

Professor Linda Bauld said the measures could be considered in other settings if levels of coronavirus rise.

Asked in an interview on BBC Radio Scotland whether introducing face coverings in workplaces should be considered north of the border to allow more people to get back to work, she said: “We’re not at that point yet.

“I don’t think we should rule it out. I think if cases go up and we need particular settings to reopen that can’t, for whatever reason, face coverings indoors absolutely, but at the moment those sectors that can work from home – that’s the message that I agree with – should continue to do that.”

Germany has recorded its highest number of coronavirus cases in more than three months sparking fears of a second wave across Europe.

The health body also confirmed a further 10 people had died after testing positive for the virus.

Since the start of the pandemic the total number of cases in Germany now stands at 228,621 with 9,253 deaths.

Research found 81 out of 110 patients discharged from Southmead Hospital in Bristol were still suffering from the virus.

The study was conducted as part of North Bristol NHS Trust’s Discover project.

Dr Rebecca Smith, from North Bristol NHS Trust, said: “There’s still so much we don’t know about the long-term effects of coronavirus, but this study has given us vital new insight into what challenges patients may face in their recovery and will help us prepare for those needs.”