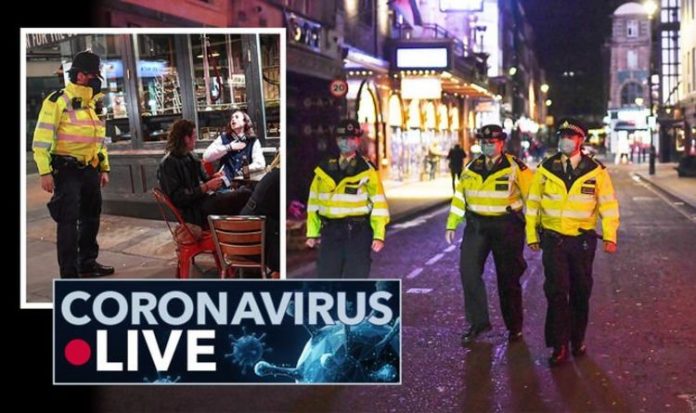 People who refuse to self-isolate will be issued fines starting at £1,000 that rise to £10,000 if this is continually broken. However, the new rules add that leaving self-isolation “recklessly” will result in a bigger fine starting at £4,000. There will also be a £1,000 charge for people who are discovered to have falsely claimed someone has been exposed to the deadly virus.

Pubs and restaurants are also banned from playing music loudly at more than 85 decibels.

And groups of more than six are not allowed to sing or dance, with pub landlords and restaurant managers, have been given powers to stop this happening.

Workers who do not tell their employers they need to self-isolate will be fined £50 as well.

A spokesman for Mr Johnson said: “We know that the vast majority of people want to do the right thing.

“What we are setting out is that those who recklessly take risks with the health of their friends, families and communities should expect this to be
taken seriously.”

The new rules come after there were a further 4,044 lab-confirmed cases of coronavirus recorded in the UK yesterday, taking the overall number to 439,013.

8.26am update: Government set to announce that adults without an A-level or equivalent qualification will be offered free college course

Apprenticeships and skills minister Gillian Keegan said the scheme would look to address “massive skill shortages” which could include sectors from engineering to teaching, science, data, digital and construction.

She told Times Radio: “There are a lot of sectors where we have skill shortages, so what we want is for people to really go on to have great careers in those areas.”

She said the scheme would be available for people aged 24 onwards “right up to however long you want to keep going” and it would apply to “as many adults” as want to take it up.

She added that it would be “a large proportion of our adults”.

Leaders in Liverpool, Leeds and Manchester have warned the Government their hospitality sectors are at risk of collapse unless coronavirus restrictions are reviewed.

In a letter to Health Secretary Matt Hancock and Business Secretary Alok Sharma, the leaders and chief executives of the three city councils said restrictions in place in the regions were threatening a “huge, disproportionate” economic impact.

The city bosses said hotel occupancy was down to 30% and footfall had dropped by up to 70%.

In the letter, they said: “The stark reality is that these businesses are facing the prospect of a complete decimation in trade, not just in the short term but as we look ahead to the sector’s traditional lifeblood of the Christmas period and almost certainly continuing into spring/summer of next year which we know with certainty will result in mass market failure, huge levels of redundancies and depleted and boarded up high streets.”

Guidance in place in the cities advises people not to mix with other households but the council leaders said it was “unenforceable” as well as being “contradictory and confusing”.