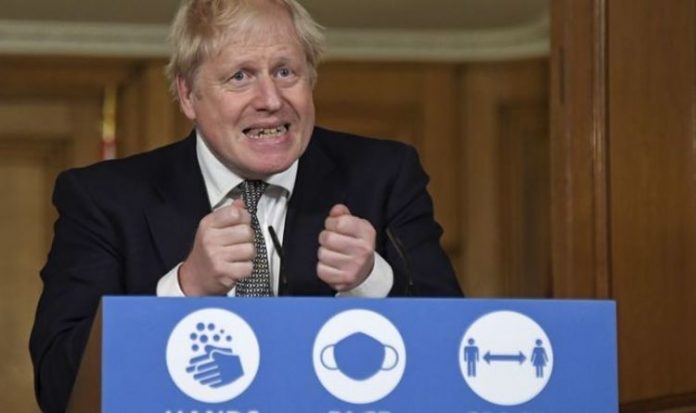 The Prime Minister’s view was supported by his chief scientific adviser Professor Chris Whitty, who said the lockdown, which is due to end on December 2, would be key.  Mr Johnson said: “Christmas is going to be different this year, perhaps very different. But it’s my sincere hope and belief that by taking tough action now we can allow families across the country to be together.”

But an exclusive poll of Express.co.uk readers has found almost half would defy COVID-19 rules to enjoy a family celebration.

One reader said: “There is no way I’ll comply with this ‘Lock-Up’. They are bankrupting us.

“Their judgement is no good, their statistics are not believable and they are wrong. No one knows what the true numbers are.”

Another said: “I ignored the last one and never got sick. I’ll ignore this one too.”

But other readers said they would respect the restrictions to protect their friends and families.

One said: ” Some might but I am more concerned with stopping the spread of this pandemic than contributing to it.

“My friends, neighbours and family are far more important than feeling big about breaking the rules.”

Another said: “What on Earth is the importance of Christmas? It’s just another day in the calendar. I doubt the virus has it ticked off as a special date in its diary. We live in a de facto secular country. It’s a nonsense.”

And another said: “If people had behaved sensibly and followed the guidelines after the first lockdown, there would no need for another.

“The steep rise in infections, deaths, etc. was due to the covidiots trying to show how brave they are and demonstrate their lack of consideration for others.”

Mr Johnson confirmed that the Westminster government was speaking to the devolved administrations in Wales, Scotland and Northern Ireland about “plans for Christmas and beyond”.

Earlier in the week, Wales First Minister Mark Drakeford said there were going to be discussions with the UK government on a “common approach to Christmas” across the UK.

Before the lockdown was announced, one of the Government’s scientific advisers said family Christmases could be made “relatively safe” if coronavirus cases are brought down sharply with stringent restrictions.

Professor John Edmunds said: “I think the only real way that we have a relatively safe Christmas is to get the incidence right down because otherwise I think Christmas is very difficult for people – nobody wants to have a disrupted Christmas holiday period where you can’t see your family and so on.”