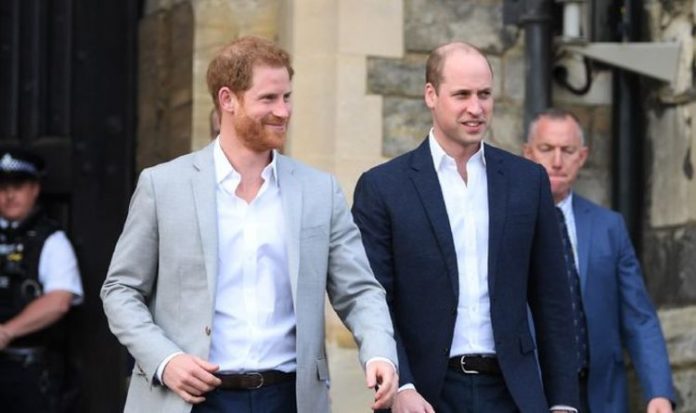 Royally Obsessed podcast hosts Roberta Fiorito and Rachel Bowie noted similarities they are seeing in Prince Harry and Prince William lately. While speaking on their podcast, the pair highlighted both Dukes are championing causes with goals of leaving the world in a better position than when they were alive. Ms Bowie noted the two brothers could be listening to each other’s work and taking inspiration from it as they adopt this future-thinking philosophy for the causes close to their hearts.

Ms Bowie said: “Prince Harry said ‘this is a global movement the train has left the station if you are not on it now then get on it

“There is so much we can do, and being a dad myself, the whole point I guess is to try and leave the world in a better place than when I found it.’

“To me, this is so similar to what Prince William is saying about climate change

“That doesn’t make me think they are ripping off each other.

“More so it makes me so happy that they are probably listening to each other.

“That is what I hope, I really hope that they are.”

The royal commentator added she was hopeful that, despite the time apart, Prince William and Prince Harry are on good terms.

Prince William has also been praised for his dedication and work towards environmental protection, like his father Prince Charles.

“Both as dads, I think that is an important cause and they are doing it in different ways but for the same reason.”

READ  Queen news: How many countries have the Queen as head of state? | Royal | News (Reports)

Ms Fiorito agreed and said: “I think that Prince William and Prince Harry’s values are the same.

“I think they are probably going to have so much common ground to connect with each other.

“In the effort to rebuild their relationship all of this will be really helpful for them to come together.”