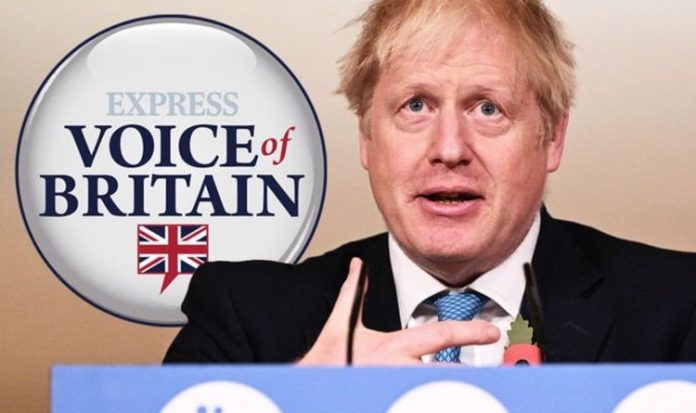 Over the weekend, the Prime Minister announced there will be strict restrictions imposed on the country from today. Chancellor Rishi Sunak also announced the UK’s furlough scheme will be extended until March.

The new restrictions are expected to last for four weeks but fears the lockdown could be extended into the New Year have already been raised.

An Express.co.uk poll – which ran from 2.30pm to 10pm on November 5 – asked if you would back a lockdown extension.

The poll received 4,705 votes and 68 percent (3,139) of voters urged the Prime Minister not to extend lockdown restrictions.

Just 31 percent (1,515) would welcome an extension to the new restrictions while one percent (51) said they didn’t know.

One reader said: “Lockdowns do not BEAT a virus all they do is delay and slow down the number of victims.

“No one with any knowledge claims they defeat a virus the virus will always be there.

“That’s the worry because delaying may well delay but it ensures more die over a longer period and our countries economy is ruined.”

A second person claimed lockdown and furlough is a “charter to steal money off the government”.

“I have not heard of any criminals being jailed for illegally claiming money off the government.

“It’s a charter to steal money off the government.”

A third reader said: “It’s not the lengthening of the lockdown (or not) that should be the issue, it’s having an effective transition strategy for leaving and post-lockdown that needs to be in place to ensure that the benefits in the reduction of the R-rate are maximised and the spread of the virus remains under control.

“Just going back to our prior behaviour after lockdown would mean that it was effectively pointless and became nothing more than a delaying tactic.”

When announcing the furlough scheme will be extended until March, Mr Sunak said the move is to help protect jobs and livelihoods.

He told MPs: “To give people across the UK certainty over the winter, I can announce today that the furlough scheme will not be extended for one month, it will be extended until the end of March.”

He told Parliament he would review the policy in January.

The furlough scheme provides 80 percent of wages up to a monthly cap of £2,500.

Mr Sunak said he had to make “rapid adjustments” to the Government’s economic response to COVID-19 pandemic owing to how the virus has spread.

He told the Commons: “I know that people watching at home will have been frustrated by the changes the Government has brought in during the past few weeks.

“I have had to make rapid adjustments to our economic plans as the spread of the virus has accelerated.”