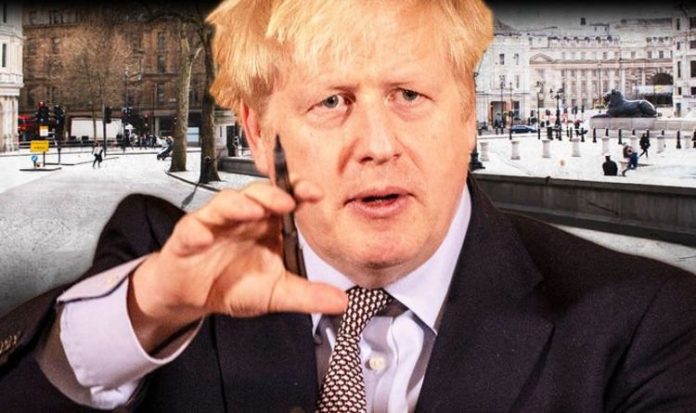 The UK is currently a patchwork of different restrictions, with large parts of the north in Tier 3, the strictest. However, scientists appearing at today’s Independent SAGE briefing have warned the system is insufficient to get control of the virus.

Speaking prior to the event, Professor Stephen Reicher of the University of St Andrews said: “We need an emergency lockdown.

“All the data reinforces what we’ve been saying.

Boris Johnson has told he must follow the example set by France and Germany (Image: GETTY/NO10 FLICKR)

Independent sage is pushing for a “circuit breaker’ lockdown, with latest figures showing daily confirmed cases exceed 23,000, and infection rates rising in most parts of the country.

With both France and Germany bringing in national restrictions, an Independent SAGE spokesman said the tier system was “not enough to reverse growth”, and only nationwide measures could bring the R rate below 1.

The number of new cases needs to fall to a maximum of 5,000 a day in order for the Government’s Test & Trace system to be able to cope – but the spokesman said it needs “urgent reform” was required in order for it to work.

The Government’s failure to act on an Independent SAGE’s six-week emergency plan to halt the spread of the virus and fix failing Test & Trace system published two weeks ago has already cost government failure to act will have cost “thousands of lives”, the spokesman said.

“And it needs to be done with a reformed Find, Test, Trace & Isolate system because without it there will be more suffering.”

A deserted Westminster Bridge at the height of the last national lockdown (Image: GETTY)

During today’s briefing, the panel of experts, chaired by former Chief Scientific Adviser Sir David King, will renew calls for Test & Trace to be replaced with a system “rooted within the regions of England” and overseen by NHS and for increased support for those needing to isolate.

They will be joined by Professor Paul Gringras, paediatrician and sleep expert at the Evelina London Children’s Hospital, who will answer questions on children with special needs.

Speaking today, Foreign Secretary Dominic Raab insisted a national lockdown in England was not inevitable to contain an increase in COVID-19 cases, claiming a localised approach could work if everyone stuck to the rules.

Asked during an appearance on the BBC whether the Government now had little choice, he said: “No, I don’t think that is right, but what we are guided by is the rate of the virus.

READ  Guidance to parents and guardians: when you should book a coronavirus test for your child

“We’ve seen some evidence since we started putting in place this tiered approach that the rate of increase has slowed.”

Minutes from a meeting of the official Scientific Advisory Group for Emergencies (SAGE) last month indicate a “circuit breaker” lockdown was recommended to the Government three weeks ago.

Prof Jeremy Farrar last month told the BBC the UK was “in the worst of all worlds” and that action should have been taken in September.

He added: “The earlier you act, the bigger impact you will have.

“And the longer you leave it, or you are indecisive or put off decisions then ultimately the harder you will have to act.”

Nevertheless, Prime Minister Boris Johnson subsequently said he did not believe a second lockdown was the the “right course”.

Official figures indicate UK’s weekly coronavirus R number range has fallen to to 1.1-1.3 from 1.2-1.4, while the daily growth rate estimate is at +2 percent to +4 percent down from +3 percent to +6 percent.